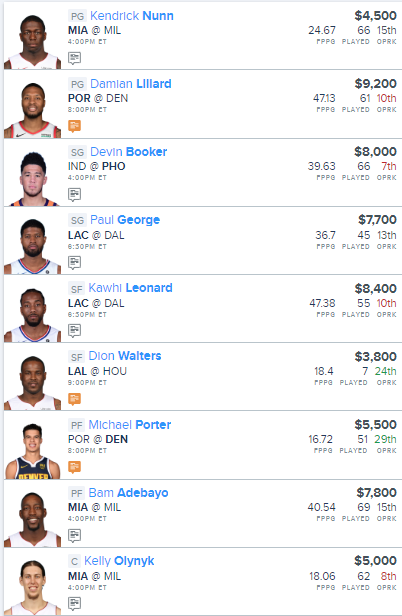 We got some great NBA action today with a 5-game slate that starts at 4:00pm.

We have a lot of injuries to monitor today. As of right now, we know that both Jimmy Butler and LeBron James are out, and it looks like Russell Westbrook is currently listed as doubtful.

On top that, we have many questionable players in Goran Dragic, Malcolm Brogdon, Jamal Murray, and Will Barton.

With Russell Westbrook out, James Harden is going to have insane ownership tonight and although it’s chance, I’m actually going to fade him tonight as I’m intrigued to see how the LAL/HOU game plays out tonight with both Westbrook & Davis out.

Instead, Im going to go with a much more balanced lineup.

I’m going with a 3-man stack of the Miami Heat as I’m going on the assumption with how careful Miami has been with Jimmy Butler, that Goran Dragic won’t play tonight after hurting his ankle the other day.

DON'T FORGET TO CHECK OUT OUR NBA DRAFTKINGS LINEUP FOR TONIGHT!!!

With Dragic limited/out and Butler not available, I like getting value with both Kendrick Nunn & Kelly Olynyk while paying up for Bam Adebayo.

Every game is critical for Portland and because of that, I want Damian Lillard in my lineup.

Denver could have some regulars back, but I’m still sticking with Michael Porter who is way to cheap at just $5,500 with the way he has been playing.

Phoenix has looked like a different team in the bubble and I just like the value that Booker brings at $8,000. Phoenix has an outside shot at the 8-seed and I think they continue their strong effort tonight agianst Indiana.

I’m excited to watch the LAC/DAL game and I’m going to roll with both Paul George & Kawhi Leonard in this one.

Rounding out the team, I’m going with the Lakers Dion Walters who should see his usage go up tonight with LeBron already confirmed out.

Here is our NBA FanDuel lineup: