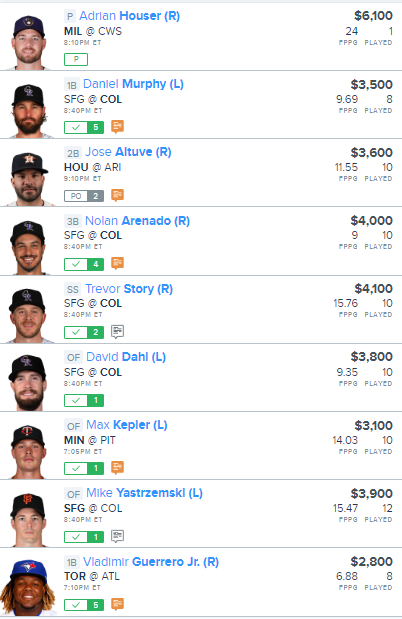 Hope everyone is having a great Wednesday!

For our FanDuel MLB lineup, we’re once again going to go with some value on the mound as we’re going to roster Milwaukee’s Adrian Houser in his match-up agianst the White Sox. Houser is outstanding against RHB’s and has some solid K-upside after posting a 9.5 K/9 ratio over his 111.1 IP last season. Chicago ranks 23rd in team strikeout rate and although there are a few LHB’s we will have to worry about with the White Sox, I think there is too much upside in this match-up to pass with Houser costing just $6,100.

Our offense will be loaded tonight with the money we’re saving with Houser and we’re once again going to be going out to Coors Field.

We have a 4-man stack of Rockies with Daniel Murphy, Nolan Arenado, Trevor Story, and David Dahl.

DON'T FORGET TO CHECK OUT OUR MLB DRAFTKINGS LINEUP FOR TONIGHT!!!

We’re also going with the Giants Mike Yastrzemski who has been outstanding this season and continues to lead off for the Giants.

Houston RHB’s have a nice match-up tonight agianst the LHP Robbie Ray and we’re going to be paying up for Jose Altuve who had a HR for us last night.

Rounding out our team, we’re going to be going with some of the best value plays on tonight’s slate with Minnesota’s Max Kepler & Toronto’s Vladimir Guerrero Jr.