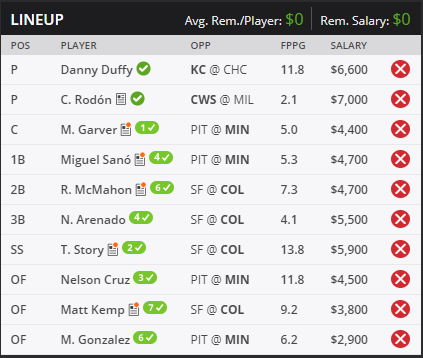 We already got all our NBA and NHL lineups out for today and we are back at tonight with some MLB action.

The first decision of the night comes if whether we want to pay up for pitching or go with some of value that is out there.

If you’re going to pay up, you might as well go all the way with Gerrit Cole as he faces off agianst what should be a rusty Philadelphia Phillies team. At the same time, there is some weather concerns in this one so you’ll need to keep an eye on this one if you go with Cole.

For our team, we’re going to be looking more of the value options so we can spend up a bit on our bats and going to go with the Royals Danny Duffy and the White Sox’s Carlos Rodon.

Danny Duffy is not a name that will stick out on most MLB slates, however, the veteran LHP tonight will get a huge advantage playing at Wrigley Field tonight with the wind blowing in about 15mph. Duffy hasn’t been outstanding this season, but he hasn’t been awful either and is coming off a game agianst the Tigers in which he picked up 8 strikeouts. The Cubs rank 26th in team strikeouts per game which gives Duffy some extra value and as the Cubs really haven’t faced Duffy before, I think he could get us a 30-40 FanDuel point night and crush value.

Frankie Montas will be a popular pitcher tonight, however, I’m going to fade him and take a chance on Carlos Rodon. Rodon didn’t fare well in his first start at Cleveland, however, I love his K-upside as he posted an impressive 11.9 K/9 ratio last season and faces a Milwaukee team that ranks 27th in team strikeout rate. Rodon has some experience agianst the current Milwaukee roster, holding them to just a .214 average and .527 OPS and I think he bounces back tonight with a quality start while picking up 6-10 K’s.

On the offensive end, we’re going to go with two 4-man stacks of both the Colorado Rockies & Minnesota Twins.

The Colorado stacks haven’t been outstanding to date this season, however, I think the Rockies go off for double-digit runs tonight against Johnny Cueto. Cueto is coming off a tough game in which he lasted just 3.2 IP while giving up 4 ER’s.

Minnesota RHB’s will be a popular stack tonight as they are up agianst the LHP Derek Holland of the Pittsburgh Pirates who allowed RHB’s last season to post a .612 slugging percentage and .997 OPS against him.

Here is our MLB Fanduel lineup: