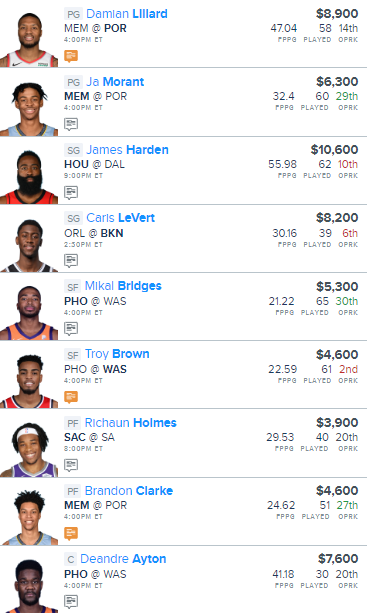 How great was it to watch to competitive NBA games last night!

The better news is that we have a full-day of NBA action today with a 6-game slate that starts at 2:30pm!

Let’s take a look at our FanDuel Lineup for today!

DON’T FORGET TO CHECK OUT NBA LINEUP FOR DRAFTKINGS TODAY!!!

At our PG position today, we’re going to be targeting the MEM/POR game and go with both Damian Lillard and Ja Morant.

This is a big game in terms of the playoff seeding and I expect big performances from both start PG’s.

Lillard seems like he is ready to go despite a foot injury and as we saw earlier this season, Lillard has 60+ FanDuel point upside on any given night. Lillard seems to play his best in big matchups and I think he puts up a huge performance today.

Morant averaged an impressive 35.0 FanDuel points per game in his 8 games prior to the break and with his athleticism, should be able to create anything he wants today against a Portland team that doesn’t have the best defensive backcourt. It’s already been stated that Morant’s minutes might be up a bit with Tyus Jones unavailable and I think he has the best value at the PG position today.

I’m paying up for James Harden as I think he is going to be the top option on the slate in his match-up against Dallas.

Caris LeVert is going to be a popular option today as basically the rest of the Nets team is sitting out the rest of the season. LeVert had an insane usage rate prior to the shutdown and it could even be higher today in his match-up against Orlando.

Phoenix has arguably the best match-up on the slate agianst the Wizards and I like the value that Mikal Bridges brings to the table today. The Suns will be without Kelly Oubre which should lead to big minutes for Bridges who averaged 32.0 FanDuel points per game in 41 mpg in his three games prior to break.

The Wizards are going to be without most of their top scoring options today, including Bradley Beal, which should open some great minutes and usage for Troy Brown who has shown 50+ FanDuel point upside this season.

We’re going to go with some value at the PF position as we’re going to roster both the Kings Richaun Holmes and Grizzlies Brandon Clarke.

Holmes should see some major action with both Alex Lin and Marvin Bagley III out of action on Friday and is one of the best overall plays on the slate at his price-tag.

I think Brandon Clarke is a sneaky pick today as most people will be selecting Jaren Jackson who just $100 more. Clarke will be coming off the bench, but I can see him getting 25-30 minutes, especially if Jackson struggles or more likely, gets into foul trouble. Clarke also seems to love his match-up agianst Portland earlier this season, going off for a 44.7 FanDuel point performance (27 points, 6 rebounds, 1 assist, 1 steal, 1 block) in 22 minutes.

Rounding out the team, I’m going to pay up for the Suns Deandre Ayton as I think he will dominate down low agianst a Suns team that has no one that can match up with him.