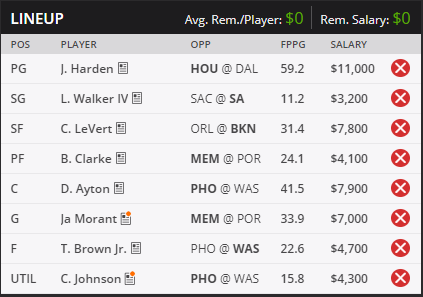 How great was it to watch to competitive NBA games last night!

The better news is that we have a full-day of NBA action today with a 6-game slate that starts at 2:30pm!

Let’s take a look at our DraftKings Lineup for today!

DON’T FORGET TO CHECK OUT NBA LINEUP FOR FANDUEL TODAY!!!

At the PG position today, we’re going to spend up for James Harden as when it’s all said and done today, I think he ends up the highest scoring player on the slate in a great match-up agianst Dallas.

Lonnie Walker IV is going to be a popular play today to provide some salary relief as the former Miami Hurricane product looks like he is going to be running with the starters and should see around 25 minutes today. Walker IV has looked decent in the scrimmages leading up to today and as he does have the ability to fill out the stat sheet with steals and blocks, he should be able to hit value at just $3,200.

Caris LeVert is going to be a popular option today as basically the rest of the Nets team is sitting out the rest of the season. LeVert had an insane usage rate prior to the shutdown and it could even be higher today in his match-up against Orlando.

I think Brandon Clarke is a sneaky pick today as most people will be selecting Jaren Jackson today. Clarke will be coming off the bench, but I can see him getting 25-30 minutes, especially if Jackson struggles or more likely, gets into foul trouble. Clarke also seems to love this match-up as agianst Portland earlier this season, he went off for a 42.0 DraftKings point performance (27 points, 6 rebounds, 1 assist, 1 steal, 1 block) in 22 minutes.

There is some nice value at the center position today, however, I’m going to go with the Suns Deandre Ayton who should be able to dominate a great match-up against the Wizards today.

I’m going to be paying up for Ja Morant today in his good match-up agianst the Trail Blazers.

Morant averaged an impressive 37.0 DraftKings points per game in his 8 games prior to the break and with his athleticism, should be able to create anything he wants today against a Portland team that doesn’t have the best defensive backcourt. It’s already been stated that Morant’s minutes might be up a bit with Tyus Jones unavailable and I think he has the best value at the PG position today.

The Wizards are going to be without most of their top scoring options today, including Bradley Beal, which should open some great minutes and usage for Troy Brown who has shown 50+ DraftKings point upside this season.

Rounding out the team, we’re going to take a chance on the Suns Cameron Johnson. The former 1st round pick has shown flashes of great potential this season and he could become a major force over the next few weeks. Dario Saric is currently questionable for tonight and with Kelly Oubre already out, this could open up major minutes today for Johnson. Even if Saric does play, I still think Johnson sees solid minutes as I think the Suns run away with this. Johnson can pile up fantasy points on both the offense and defensive end and I just think he has great upside tonight.