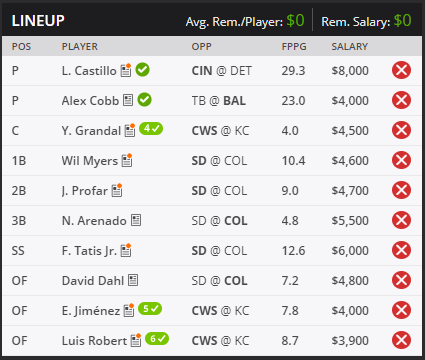 Hope everyone is enjoying their Friday and is ready for a great weekend of sports!

We lost another game tonight (Brewers/Cardinals) due to COVID-19, however, we still have a great MLB Slate tonight that features 12 games and starts at 7:05pm.

As for the weather, there isn’t much to worry about tonight outside of some small concerns with the TAM/BAL & NYM/ATL games. I’m concerned enough at this point based on the recent weather reports to avoid either of these games.

Let’s take a look at our DraftKings Lineup for today!

DON’T FORGET TO CHECK OUT OUR MLB LINEUP FOR FANDUEL TODAY!!!

On the mound tonight, we’re going to be going with the Luis Castillo of the Cincinnati Reds and Alex Cobb of the Baltimore Orioles.

Luis Castillo is going to be very highly owned as I think he has by far the most upside on the slate and for some reason, even in a good match-up agianst the Detroit Tigers, is just the 10th most expensive pitcher on DK tonight. Castillo was lights out agianst Detroit in his season opening (6.0 IP, 6 H, 1 ER, 11K) and I expect similar success tonight.

Alex Cobb brings some of the best value when it comes to the mound tonight and if you have already read my FanDuel article, you know I’m confident in Cobb tonight in his match-up against his former team, the Tampa Bay Rays. Cobb has been dealing with injuries over his last few seasons but looked like his former self in his first game agianst the Red Sox going 5.1 IP while giving up just 1 ER while striking out 6. Cobb comes with risk, but at just $4,000, I’m not passing up on his value tonight.

As we’re saving money on Cobb, we are going to be going with a 3-man San Diego stack agianst Jon Gray of the Colorado Rockies.

Gray isn’t the worst pitcher that the Rockies have, but he certainly has shown over the years that he can really struggle at times and I think the Padres are going to jump all over him tonight.

Staying in this match-up, we’re also going to pay up for the Rockies Nolan Arenado & David Dahl.

Arenado has gotten off to a slow start to the season, however, Arenado at home is almost a sure thing as last season, the veteran third baseman posted a .351 average and 1.057 OPS at Coors Field.

Similar to Arenado, Dahl has been outstanding at Coors Field and finished last season posting a .349 average/1.000 OPS at home. Dahl also gets some extra value as he’ll be batting leadoff tonight against the RHP Garrett Richards.

I’m a fan of the White Sox tonight in their match-up agianst the LHP Kris Bubic who will be making his MLB debut tonight. Bubic has yet to pick above Single-A and I think could be in for a long night agianst dangerous White Sox offense.

For the White Sox, we’re going to go with a 3-man stack of Yasmani Grandal, Eloy Jimenez & Luis Robert.