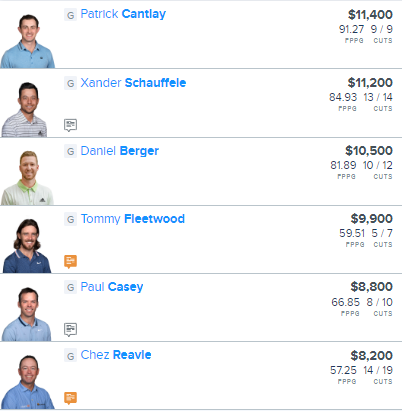 We got some great PGA action this week as the best golfers in the world will be teeing it up at TPC Southwind in the WGC-FedEx St. Jude Invitational.

As this is a WGC event, remember that we do not need to worry about the cut line this week as everyone will be teeing it for all four rounds.

TPC Southwind is a Par-70 course with just two Par-5’s and certainly is a course you can post a decent number behind strong approach play. Both of the Par-5’s isn’t overly long (554 Yards, 530 yards) and this is just a course where I don’t feel distance is as important compared to solid ball-striking and sticking your approach shots.

Let’s take a look at our FanDuel lineup for this week!

DON’T FORGET TO CHECK OUT OUR PGA DRAFTKINGS LINEUP FOR THE WGC-FEDEX ST. JUDE INVITATIONAL!!!

We’re going to spending up on both Patrick Cantlay & Xander Schauffele.

Cantlay is one of the best ball-strikers in the league and has been solid in his three events since retuning, finishing (T-11, T-7, T-32). Cantlay in my opinion is on of the safest plays on the slate and if he gets his putter going, I think he has a great shot to finished at the top of the leaderboard on Sunday.

Schauffele had many of his DFS believers quite upset last Thursday after posting an opening round 78 at the Memorial Tournament, however, he reminded us that you can never count him out after making the cut by posting an impressive round of 69 in Round 2 and ended up with a solid T-13 finish. Schauffele has thrived at the WGC tournaments early in his career and I expect another strong performance this week.

When you think of ball-striking, Daniel Berger is a name that quickly comes to mind and I think he is set-up for a monster week on this course. Berger missed the cut at the Memorial Tournament, however, has played well since the return of the PGA, winning the Charles Schwab classic and coming in a T-3 at the Travelers Championship.

I’m expecting bounce back performances from both Tommy Fleetwood & Paul Casey this week and feel like we could see some lower than normal ownerships on both due to their recent performances.

Rounding the team, we’re going to get some nice value with Chez Reavie who has made 4 consecutive cuts and seems to be in decent form after finishing T-17 last week at the Memorial Tournament.