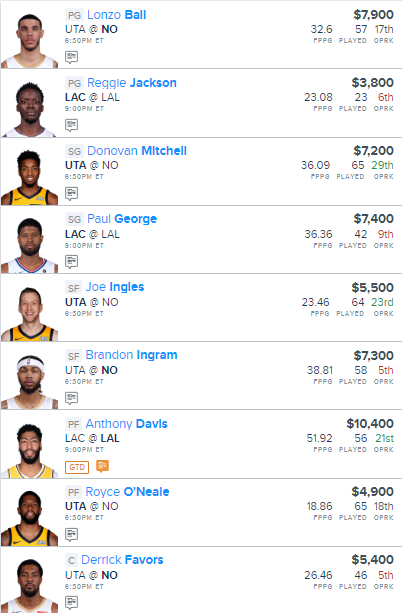 The NBA is back tonight as we have a great two game slate that starts at 6:30pm and features the Utah Jazz vs. New Orleans Pelicans & Los Angeles Clippers vs. Los Angeles Lakers.

Please make sure you follow my Twitter (@BrettCU05) as this is the best place I’m going to be able to post any last-minute adjustments. We still are waiting for the update injury reports and as there are a ton of individuals that have injury tags on them, any unexpected news could really alter our lineups.

Let’s take a at our FanDuel lineup for tonight!

DON’T FORGET TO CHECK OUT NBA DRAFTKINGS LINEUP FOR TONIGHT!!!

Looking at the two games tonight, I’m going to be targeting players more from the Utah/New Orleans match-up which currently has a 227.50 implied scoring total on the slate.

Utah is going to be a popular stack tonight as with Bojan Bogdanovic opting out from playing the rest of the season, it leaves Utah with what should be a short rotation and heavy minutes for 5-6 players.

It’s hard to past up on Jordon Clarkson, but as he is going to probably be the highest owned player on the slate, and I want to get both Donovan Mitchell & Paul George in my lineup, I will be fading Clarkson on my FanDuel team.

For the Jazz, we’re going to be rostering Donovan Mitchell, Joe Ingles, and Royce O’Neale. Both Ingles and O’Neale should be starting and seeing 30-35 minutes and I just like the value that they both bring (combined for 69.4 FanDuel points their last game vs. TOR on March 9th) at their prices.

New Orleans still hasn’t confirmed if Zion Williamson is going to play and even if he does, I’m not going to risk rostering him tonight as I do think he’ll be on a minute’s restriction tonight.

For the Pelicans, I’m going to go with a 3-man stack of Lonzo Ball, Brandon Ingram, and Derrick Favors.

Ball and Ingram have been solid producers throughout the season and as their young, I think they’ll have their legs under them and see 35 minutes tonight if the game stays close.

As for Derrick Favors, I love going with him over what should be a heavily owned Rudy Gobert tonight. Favors is very familiar with Gobert as spending 9 years with the Jazz and between he fact the he has looked in the scrimmages and that he could see a bump in minutes with Williamson most likely restricted, I love getting favors in our lineup.

When it comes to the Lakers/Clippers match-up, one of the first things you need to look at is the current backcourt situation for the Clippers as currently, Lou Williams is out and Patrick Beverley is currently a GTD although he missed the AM shootaround today. If Williams and Beverley are out, Reggie Jackson almost comes a must-start.

I’m going to fade both Lebron James & Kawhi Leonard as I think they’ll just battling against one another all game and instead pay up for the other superstars in Paul George & Anthony Davis.