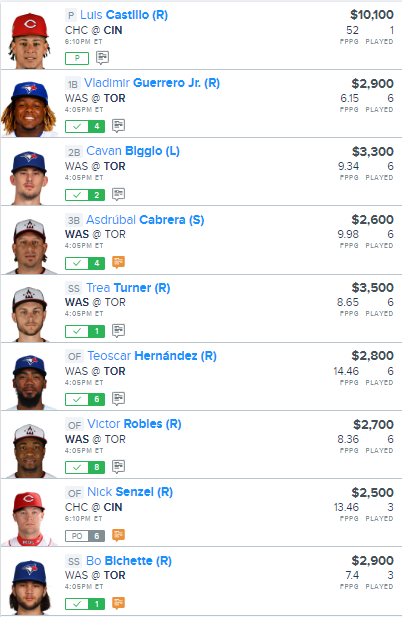 It’s Thursday which means we have some day MLB action that we get excited for.

We have a two-game “early slate” that starts at 4:05pm which features Toronto Blue Jays vs. Washington Nationals & Chicago Cubs vs. Cincinnati Reds.

Let’s take a look at our FanDuel lineup for this afternoon.

DON’T FORGET TO CHECK OUT OUR MLB “EARLY SLATE” LINEUP FOR DRAFTKINGS!!!

We have some solid options on the mound this afternoon and we are going to go with top priced option in Cincinnati’s Luis Castillo. Castillo posted a solid 3.24 ERA in 4 starts agianst the Cubs last season and more impressive racked up 30 K’s over 25.0 IP. Castillo held the Cubs to just a .207 average last season and although they are playing in a great hitter’s ballpark, the wind will be blowing in today.

On the offensive end, we’re going to be mostly targeting the Toronto/Washington game as not only are the matchups better, the wind will be blowing out about 10 MPH to dead center this afternoon at Nationals Park.

The Blue Jays have the better match-up agianst the RHP Erick Fedde despite no one on the Blue Jays roster facing the right-hander before.

For the Blue Jays, we are going to stack Vladimir Guerrero Jr., Cavan Biggio, Teoscar Hernandez, and Bo Bichette.

Washington has a tough matchup agianst Hyun Jin Ryu, however, I think the Nationals will be able to get to Ryu he didn’t look outstanding in his first start of the season agianst Tampa Bay.

Rounding out our team, we’re going to take a chance with Cincinnati’s Nick Senzel who has had some success agianst Yu Darvish in his young career, posting a .333 average in 12 AB’s while also racking up a couple of SB’s.