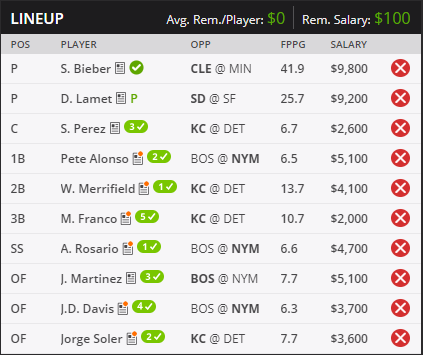 Hope everyone is enjoying a Thursday filled with sports! Love that PGA, NBA, and MLB are all going on today!

In terms of weather, we do have to worry about the BAL/NYY game and I’m going to be staying away.

We have an 8-game “Main Slate” that starts at 7:05pm tonight and let’s take a look at our DraftKings lineup for tonight!

DON’T FORGET TO CHECK OUT OUR MLB “MAIN SLATE” LINEUP FOR DRAFTKINGS!!!

On the mound tonight, we’re going to be going with the Cleveland’s Shane Bieber and San Diego’s Dinelson Lamet.

Bieber was lights out in his first match-up of the season against the Kansas City Royals, racking up a 41.9 DraftKings point performance behind a 14-strikeout performance. Bieber is going to have a tough match-up tonight agianst Minnesota, however, he did show last season that he had no problem piling up strikeouts agianst the twins, picking up 33 K’s over 28.0 IP.

Lamet in an outstanding match-up on the road agianst the San Francisco Giants. Lamet is one of the many very talented younger arms in the league and after missing 2018 due to injury, is starting to live up the potential he has. Lamet has great K-upside as he has a career 11.8 K/9 ratio and looked great in his season opener against the Diamondbacks (5.0 IP, 5 H, ER, 8 K). The current Giants roster has just a .077 average agianst Lamet over 26 AB and as Lamet will at the pitcher’s friendly AT&T Park, I think he is the top option on the slate tonight.

On the offensive end, we’re going to be focusing on the Kansas City Royals & New York Mets,

The Royals have a great match-up agianst the long-time veteran Ian Nova who is long past his prime and struggled in his first game this season (5.0 IP, 3 H, 3 ER, 2 HR). Nova is not stranger giving up the long-ball as he allowed 30 HR’s last season and as the Royals are not that overpriced, I think they’re a great stack tonight.

I’m a Red Sox fan, and I must say that I haven’t seen anything so far in the short Red Sox career of Martin Perez that warrants him having a starting job in MLB. Perez was hit hard in his first outing agianst the Orioles (5.0 IP, 6 H, 4 ER) and I think the RHB’s of the New York Mets are in for a big day tonight.

For the Mets, we’re going to go with Pete Alonso, Amed Rosario, and J.D. Davis.

Rounding out our team, as I have some extra salary, you can’t go wrong with rostering Boston’s J.D. Martinez when he is up agianst an LHP.