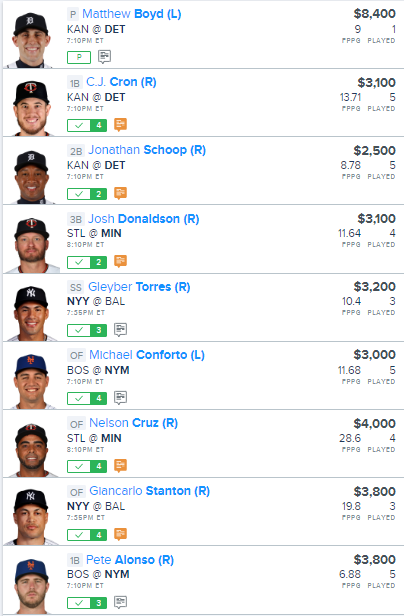 We continued to cash with our MLB FanDuel lineup finished with a 130.1-point performance last night which had us cashing in both our 50/50’s and some of the bigger GPP’s!

Unlike the two MLB “Main Slates” we have a bunch of options on the mound tonight, however, we’re going to be targeting more of the mid-range pitchers who I think have some great value which still gives some flexibility for our hitters.

As for the weather, it’s for the most part another quiet night with currently the only one that might run into a little trouble is the Tampa Bay/Atlanta game which we’re not targeting tonight anyways.

This is mostly going to be just an image only as we’re about an hour away from first pitch.

Let’s take a look at our FanDuel lineup for tonight.

On the mound tonight, we’re going to go with Matthew Boyd of the Detroit Tigers in his match-up agianst the Kansas City Royals. Boyd has a decent match-up agianst the Kansas City Royals who come in ranked 28th in team strikeout rate and although Boyd struggled in his first outing, I think he bonces back with a big performance tonight in which he can get us 6 or 7 innings and a win.

On the offensive end, we’re going be targeting players from the Tigers, Twins, Yankees, and the Mets tonight!

For the Tigers, we’re getting some nice value in C.J. Cron & Jonathan Schoop in their decent match-up against the LHP Danny Duffy.

Minnesota has been crushing the ball as of late and I think that continues tonight against the Cardinals Daniel Ponce de Leon. We’re going to be paying up for two of their biggest bats in Josh Donaldson & Nelson Cruz.

The Yankees will probably be one of the highest owned stacks on the night and we’re going to get in on that action with both Gleyber Torres & Giancarlo Stanton.

The Mets have had no trouble putting runs on the board in their series against the Red Sox and I think that continues tonight even though the Red Sox are throwing out their best available pitcher at the moment in Nathan Eovaldi. Eovaldi throws gas, but I think he gives up a few HR’s tonight and I’m betting that both Michael Conforto & Pete Alonso go deep tonight.