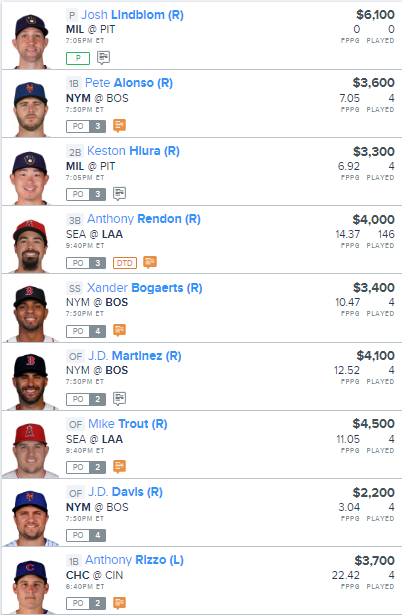 We had a decent night on Monday as our 172-point performance had us cashing in both our GPP’s & 50/50’s! We finally got some offensive power from out lineup as Pete Alonso, Jose Altuve, Xander Bogaerts, and Whit Merrifield all went yard!

For tonight’s slate, we are once again going to deal with very limited pitching options on the slate, we’re going to one be paying up heavily on the offensive end.

As for the weather, we don’t really have too much to worry about tonight outside of the TOR/WAS game, however, we’re not going to be rostering anyone from this match-up so we should be good to go.

On the mound, the only really big name tonight is Walker Buehler, however, as he is only slated to go about 3-4 innings and that he has a tough match-up on the road agianst Houston, I just don’t think he is worth paying up for the $10,500 price-tag. Instead, we’re going to go with some value in Milwaukee’s Josh Lindblom who will making his return to MLB after a highly successful couple of years in the KBO. Lindblom has been one of the best pitchers in the KBO over the last two seasons, posting a 35-7 record with a sub-3.00 ERA and as between the fact that I think he’ll be able to pick up some K’s against a less than average Pittsburgh Pirates team, I think he has great upside tonight.

On the offensive end, our lineup is going to have a lot of big names in it tonight.

I think the best stacks of the night are the Red Sox, Mets, Brewers (RHB), & Cubs (LHB).

For the Red Sox, we’re once agianst spending up for both Xander Bogaerts & J.D. Martinez.

For the Mets, we are spending up for Pete Alonso and going to get some nice value in J.D. Davis.

Milwaukee will be up agianst the LHP Derek Holland who extremely struggle agianst RHB’s last season, allowing them to post a .288 average and .997 OPS. For the Brewers, we’re going to go with the talented youngster, Keston Hiura.

Anthony Rizzo is off to a hot start in 2020 and I think he continues smashing the baseball against the RHP Tyler Mahle who allowed LHB’s to post a .530 slugging percentage agianst him last season.

Rounding out our team, as we still had a bunch of salary left, we’re going to pay up for the duo of Mike Trout & Anthony Rendon (confirmed that he is making his debut for LAA tonight) agianst the LHP Justus Sheffield.