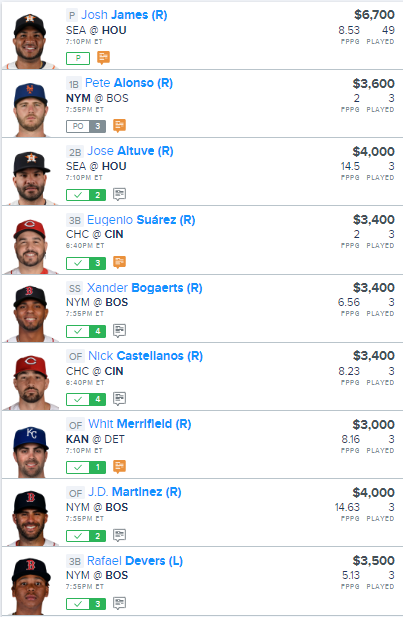 Some tough news for MLB this morning as two games (BAL/MIA & NYY/PHI) were cancelled due to a few of the Marlins players coming down with COVID-19. The good news is that MLB is going to continue and although it’s going to be a concern that this could lead to a bigger problem, we’ll just enjoy the fact at this moment we still got baseball to watch!

The biggest one that is going to be affecting our current lineups is with the CHC/CIN game, however, as the day has gone on, it’s looking better and better. The one game that looks most likely affected as of right now is the CHW/CLE game.

On the mound tonight, we’re going to be targeting some great value with Houston’s Josh James. James was used more as a reliever down the stretch last season, but this is a talented pitcher that had a bunch of success as a starter down in the minors. James has some electric stuff and a great strikeout upside after posting a 13.8 K/9 so far in his limited exposure in the bigs. James can have issues with control, however, after getting some solid experience last season, I think he has the best upside on what is a weak pitchers slate.

On the offensive end, I’m going to be targeting the Boston Red Sox & Cincinnati Reds.

Boston struggled as chalk stacks the last two days, however, I like them tonight at home agianst Michael Wacha. Red Sox hitters seem to do much better against opposing pitchers that try to blow fastballs by them and that’s exactly the type of pitcher Wacha is, as he generally has relied on his 93-95 MPH fastball.

I think the Red Sox offense explodes tonight and I’m stacking the heart of it with J.D. Martinez, Rafael Devers, and Xander Bogaerts.

The Reds will be facing off against Jon Lester who is comes into this season way past his prime and has shown in recent years some major struggles agianst RHB. The wind will be blowing out to left field tonight in one of the best hitters ball parks in the league so I’m not going to be shocked to see many Reds stacks tonight.

For our lineup, we’re going with two guys that have had great success agianst Lester over their careers in Eugenio Suarez and Nick Castellanos.

We had plenty of salary left, so we rounded out the rest of our lineup with Pete Alonso, Jose Altuve, and Whit Merrifield who all have plus matchups tonight.