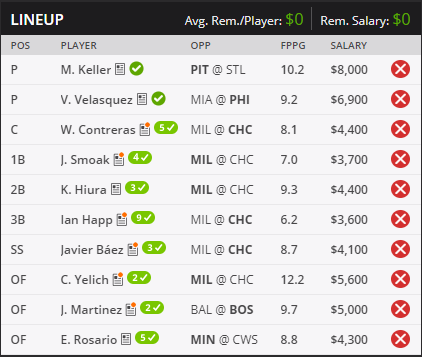 Happy Sunday! Hope everyone is enjoying their weekend!

We have a 11-game MLB “Main Slate” this afternoon that starts at 1:05pm and let’s take a look at our FanDuel lineup!

Just a reminder as it’s Sunday, even though it’s early in a shorten season, this is generally the day we see some interesting lineup changes. It’s important to make sure you check those confirmed starting lineups prior to the 1:05pm start time!

Let’s take a look at our DraftKings lineup for this afternoon!

DON’T FORGET TO CHECKOUT OUR MLB FANDUEL LINEUP FOR THIS AFTERNOON!!!

On the mound today, we’re going to be going with value today as we are rostering Mitch Keller of the Pittsburgh Pirates & Vince Velasquez of the Philadelphia Phillies.

For our SP1, we’re going with the talented young prospect in Mitch Keller who despite his struggles after being called up last season, certainly has the arm talent to be a front of the rotation starter for the Pirates. Although he struggled with a 7.13 ERA last season, he showed his upside with his incredible 12.2 K/9 ratio and as I think he we will see a more polished version of Keller this season now that he has some experience under his belt.

For our SP2, we’re going with Vince Velasquez of the Philadelphia Phillies in his match-up agianst the Miami Marlins. Velasquez has never seemed to put it all together, however, we know he had the ability for big fantasy games as he does come into this match-up with a career 9.8 K/9 ratio. Miami has had it’s success against Velasquez in the past, but this is just not a great overall lineup agianst RHP and as I want to save some salary for our bats today, I’m fine with rostering Velasquez.

On the offensive end, you must target the Milwaukee Brewers/Chicago Cubs game as the wind will be blowing out at Wrigley making it probably the best hitters park on the slate. On top of that, the pitching match-ups are favorable from the hitters as the Brewers will be throwing out Freddy Peralta while the Cubs will have Tyler Chatwood on the mound.

For the Cubs, we’re going with a 3-man stack of Willson Contreras, Ian Happ, and Javier Baez.

For the Brewers, we have a 3-man stack of Justin Smoak, Keston Hiura and Christian Yelich.