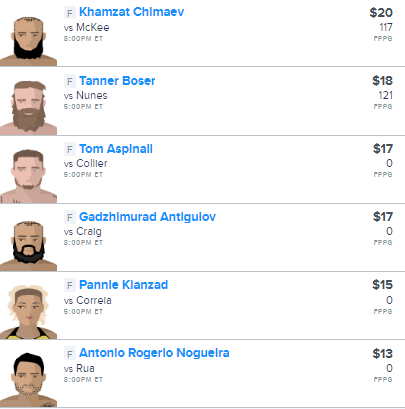 The UFC continues the action at “Fight Island” tonight as we have UFC Fight Night 174!

Let’s take a look at our FanDuel lineup for UFC Fight Night: 174 which starts at 5:00pm.

DON'T FORGET TO CHECK OUT OUR DRAFTKINGS LINEUP FOR UFC FIGHT NIGHT 174!!!

At our MVP slot, how can we not go with Khamzat Chimaev after his dismantling of John Phillips just 10 days ago. Chimaev was one of the top prospects in the Welterweight division coming into that Phillips fight and he didn’t disappointment as he dominated from start and was able to get a submission early in the 2nd round. Chimaev is up agianst Rhys McKee tonight who I just don’t see being able to put up much of a fight and I expect Chimaev to finish this one by the first-round tonight.

At the $18 range, we’re going to pay up for the Canadian, Tanner Boser, who similar to Chimaev is recently coming off an impressive KO performance agianst Philipe Lins. Boser should have a huge advantage in terms of leg kicks and as he did show is power agianst Lins, I think he’ll be able to take care of business against Raphael Pessoal who hasn’t been overly impressive in his UFC career.

We’re going to pay somewhat up for both Tom Aspinall & Gadzhimurad Antigulov at the $17 range.

Aspinall is a decent favorite agianst Jake Collier and comes into his UFC debut with a 7-2 professional record in which all his wins have come by KO or Submission. I think Aspinall has the advantage on the ground in this one and I think he can come out of the gates fast and get us a quick KO/Submission.

Antigulov is a slight underdog, but I like him in his fight against Paul Craig. Antigulov is as aggressive as they come which is always nice to have in these DFS contests and has been great in piling up victories by submission. Antigulov hasn’t looked great recently, but I’m not overly solid on Craig and I’m going that he gets an early submission in this one.

Klanzad will have the height and reach advantage agianst Bethe Correia and as she is somewhat aggressive, I think she could pile up some significant strikes.

Nogueira is going to retire after this fight, and I just think he has too much value at this price agianst another washed up fighter in Mauricio Rua. Nogueira could easily lose this fight but he still has plenty of power to hurt Rua and I’m going with the narrative that he finished his storied career with a bang.