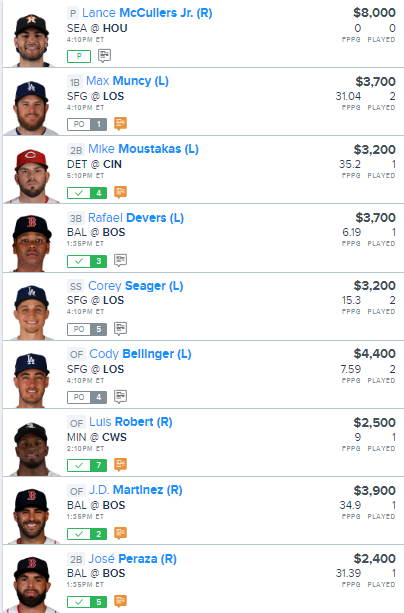 Hope everyone is enjoying the start to the weekend!

We have a 13-game “Main Slate” today that starts at 1:05pm and we no weather concerns, we should be solid with our initial lineup barring any late surprising roster moves.

Let’s take a look at our FanDuel lineup for this afternoon!

DON’T FORGET TO CHECK OUT MLB DRAFTKINGS LINEUP FOR TONIGHT!!!

We have a lot of action to get to today, so I’m keeping these a bit shorter than normal.

On the mound, we are going to roster Houston’s Lance McCullers Jr.  in his prime home match-up agianst the Seattle Mariners. McCullers missed last season after having Tommy John surgery, however, has looked outstanding so far in Spring/Summer ball and still has that outstanding curve ball that can generate a ton of swing-and-misses. McCullers has a career 10.1 K/9 ratio and as Houston’s offense should give him plenty of support, I love his upside at his current price.

On the offensive end, we are going to focus on stacking both the Boston Red Sox & Los Angeles Dodgers.

Boston will be up agianst the RHP Alex Cobb of the Baltimore Orioles Cobb struggled in limited exposures in 2019, before his season was cut short due to a hip injury. The Red Sox have had plenty success agianst Cobb in their careers as their currently line-up is hitting .300 against him and as I think Baltimore could be in for another long day agianst the Red Sox bats.

For the Red Sox, we are going to roster Rafael Devers, J.D. Martinez, and Jose Peraza.

San Francisco will be throwing out Logan Webb later today which should lead for the Dodgers probably being the chalk stack tonight. In 39.2 IP pitched last season, Webb posted a 5.22 ERA and 1.462 WHIP. This will be the first time that Webb will face the Dodgers, but I expect it to be a short outing.

For the Dodgers, we are going with Max Muncy, Corey Seager, and Cody Bellinger.

Moustakas had a huge opening day for the Reds, posting 35.2 FanDuel points and should be in for another big day as he will be at home agianst the veteran Ian Nova.

Robert is going to be a star in this league and I’m just going to enjoy the ride while he is still price in just the mid-$2000 range.