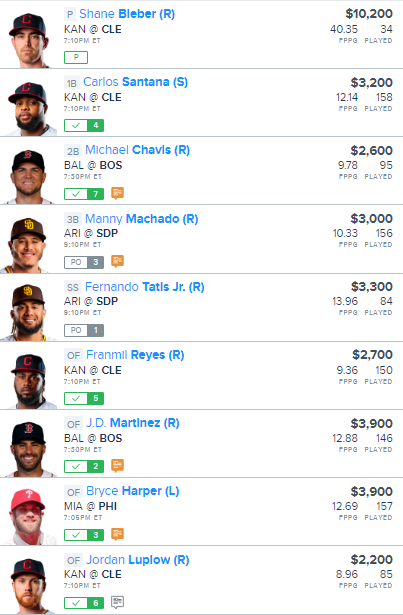 Hope everyone enjoyed the start of the MLB season last night as although it was hectic getting the lineups ready with all the last minute changes, we were to get our lineups set and cashed in both our GPP’s & 50/50’s for both FanDuel & DraftKings!

Last night was a solid reminder that when preparing MLB DFS lineups, that you need to keep a very watchful eye on all the MLB news prior to first pitch!

Let’s keep the winning going as we start the season and we take a look at our FanDuel lineup for tonight!

On the mound tonight, we are going to spend up for Shane Bieber in his match-up agianst the Kansas City Royals. Bieber was outstanding last season, becoming the ace of the Indians pitching staff after finishing the season with a 3.28 ERA while compiling a 10.88 K/9 ratio. Bieber has great control and very seldom walks individuals which allows him to pitch deep into games and although Kansas City did decent against him last season, I think he is the arm that you have to roster on FanDuel tonight.

Sticking with the Indians, we’re going to be going with a 3-man stack of the heart of their order in Carlos Santana, Franmil Reyes, and Jordan Luplow in their prime match-up at home agianst the LHP Danny Duffy of the Kansas City Royals.

Danny Duffy had some decent years with the Royals, however, this is a pitcher that is past his prime and certainly does not have anything new that the Cleveland Indians haven’t seen before.

We’re going with a 2-man stack of the Boston Red Sox tonight in Michael Chavis & J.D. Martinez as they have one of the best match-up’s on the slate agianst the Orioles Tommy Milone who really faded down the stretch last season and shows you the state of the Baltimore Orioles pitching staff if he is their opening day starter.

Chavis has some of the best value on the slate after showing his HR-upside with 18 HR’s last season while posting a .481 slugging percentage vs. LHP.

J.D. Martinez surprised many with opting to stay with the Red Sox during the off-season and must be considered one of the best plays tonight. Martinez dominated LHP last season to the tune of a .887 Slugging % & 1.381 OPS and comes into tonight’s match-up with a .333 average & 1.122 OPS with 2 HR’s in 18 AB’s agianst Milone in his career.

Our next 2-man stack will come with the San Diego Padres Manny Machado & Fernando Tatis Jr. in their home match-up agianst the LHP Madison Bumgarner.

Bumgarner is not longer the “Ace” he once was with the San Francisco Giants and his numbers against RHP’s showed this last season, after allowing RHB’s to hit 26 HR’s off him in 2019.

Machado did not live up to that huge contract in his first year with the Padres, however, there is no reason he should be priced at just $3,000 against an LHP. Machado, even in a down year in 2019, still dominated LHP with a .315 average, .685 slugging %, & 1.089 OPS and I think he finds some success agianst Bumgarner tonight.

Rounding out the team, we are going to pay up for the Phillies Bryce Harper, who despite struggling last season, is still one of the best players in the game today. Harper, despite a year in which at times struggled at the plate, still hit 35 HR’s last season and has a nice matchup agianst the Marlins Sandy Alcantara in which he has posted a .500 average & 1.146 OPS agianst in 12 career AB’s.