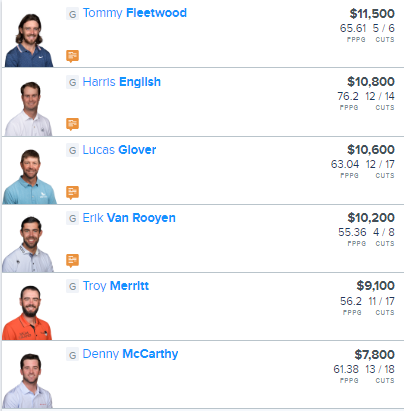 It was great to watch the Memorial Tournament last weekend despite the fact our lineups, after some regrettable last-minute changes, failed to cash in our 50/50’s and GPP’s.

After looking like there could have been an advantage for the AM groups last Thursday, I decided to make some adjustments to roster a full team teeing off in the AM. Well, the weather if anything came earlier than expected and really if anything, game the PM groups more of an advantage. What’s worse, is that I replaced John Rahm (1st), Gary Woodland (T-22nd), and Lucas Glover (T-38th) with Hideki Matsuyama (Missed Cut), Kevin Streelman (T-54th) and Abraham Ancer (T-58th).

If you have been playing DFS as long as I have, you know these things happen and we just move on and focus on this week!

For this week, we have the 3M Open which will be taken play at the TPC Twin Cities (Blaine, MN) and starts at 7:50 AM (EST).

TPC Twins Cities was one of the easiest golf courses that the professionals tee it up on last season and we should expect much of the same this year as despite the Par-71 course being long (7468 yards), there really isn’t much difficulty or areas where PGA professionals can get into serious trouble.

Similar to many of the tournaments, although distance will help, this is a course that favors ball-strikers and we really are going to be looking at the players that have solid SG: Tee-to-Green and SG: Approach.

Let’s take a look at our FanDuel lineup:

DON’T FORGET TO CHECK OUT OUR DRAFTKINGS LINEUP FOR THE MEMORIAL TOURNAMENT!!!

Kicking off our lineup, we are going to be paying up for Tommy Fleetwood ($11,500) who will be making his first appearance back on the PGA Tour since it returned. If this were a tougher course, I would probably hold off on Fleetwood just due to the concerns of him being a bit rusty, however, we know that Fleetwood is one of the best ball-strikers on tour and is long overdue for a PGA win. Fleetwood finished the 2019 season with his top two categories being SG: Approach (+0.43) & SG: Tee-to-Green (+1.47) and I think he comes out of his break strong at the 3M Open.

Lucas Glover has not missed a cut since the PGA returned to action (5 for 5) and is known as one of the better ball strikers on tour. Glover finished a soldi T-7th last year at TPC Twin Cities, which included an impressive round of 62 in his final round. Glover finished with a +0.73 SG: Approach last week at the Memorial Tournament and comes into this tournament with a +0.63 SG: Approach & +0.78 SG: Tee-to-Green on the season.

Harris English was having one of his best seasons on the tour prior to the COVID shutdown and despite disappointing with a missed cut in his first appearance back after the break, English has looked back to form over his last two performances with a T-17th at the RBC Heritage & T-13th at the Memorial Tournament. English finished 6th last week in terms of SG: Approach (+2.51) and comes into this week with a +0.53 SG: Approach & +1.15 SG: Tee-to-Green on the season.

Erik Van Rooyen ($10,200) is probably going to have some higher ownership than normal this week as the South African is coming off an impressive T-22nd at the Memorial and is known on the tour for his ball-striking ability. Van Rooyen had his irons going for him last week finishing 7th in the tournament in terms of SG: Approach (+2.31) and comes into this tournament with a +0.59 SG: Approach & +1.17 SG: Tee-to-Green.

Troy Merritt ($9,100) struggled at the Memorial Tournament, however, has played overall since the PGA returned, making his previous four cuts which included a T-22nd at the Workday Charity Open and T-8th at the Rocket Mortgage Classic. Merritt has experience at TPC Twins Cities after finishing last year T-7th and comes in with a +0.35 SG: Approach & +0.36 SG: Tee-to-Green on the season.

Rounding out the team, we are going to get some nice value with Denny McCarthy ($7,800). McCarthy has not played his best golf since the PGA returned, however, he seems extremely undervalued on FanDuel after making the cut at the very difficult Memorial Tournament last week. McCarthy isn’t the strongest in the categories that we’re looking at this week, however, he did have a solid T-22nd showing at TPC Twin Cities last season and as he can make up a lot of strokes with his putting, I’m fine rostering him to be able to afford the Fleetwood, Glover, English trio.