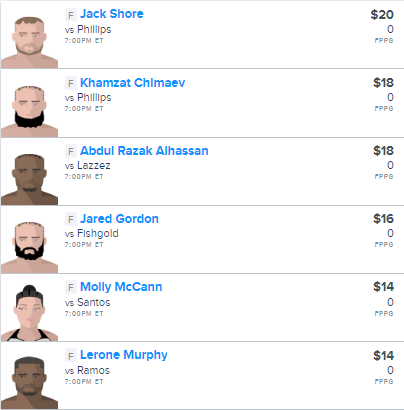 It was a great first night on “Fight Island” as our lineups cashed in both our 50/50’s & GPP’s for UFC 251 and we’re lucky as we have more MMA action tonight with UFC Fight Night 172.

Let’s take a look at our FanDuel lineup for UFC Fight Night 172 which starts at 7:00pm.

DON'T FORGET TO CHECK OUT OUR DRAFTKINGS LINEUP FOR UFC FIGHT NIGHT 172!!!

For our lineup, I’m paying up for three of the more expensive fighters in Jack Shore, Abdul Razak Alhasshan, and Khamzat Chimaev who I feel all have strong chances to end their fights by KO and rack up triple-digit points.

Jack Shore is undefeated professionally (12-0) and was impressive in his first victory against Nohelin Hernandez, picking up 121 points in a 3rd round submission win that featured Shore racking up 4 takedowns & 11 advances. Shore will be up agianst Aaron Phillips who is taking this fight on short notice and although has done well lately on the smaller UFC tours (WFC & VFL), hasn’t fought at the UFC level since 2014 in which he went 0-2.

Abdul Razak Alhasshan will be coming back after a 2-year absence from the UFC, but there is no doubt he we will be one of the higher owned fighters tonight with his history of first-round knockouts. Alhasshan as some of the best power in the Welterweight division and as I expect him to bring out a ton of energy being his first fight back, I think he is going to overwhelm Mounir Lazzez from the start and get a quick KO here.

Khamzat Chimaev is a heavy favorite at -380 and although his opponent, John Phillips, does have some solid power and certainly can score an upset here with one punch, Chimaev should be able to take this one to the ground at will and sooner or later will submit or KO Phillips.

I’m gong with Jared Gordon in his match-up agianst Chris Fishgold. Gordon has lost 3 of his last 4 fights, but still comes into this match-up with a decent 15-4 professional record. Gordon is an aggressive fighter who is averaging more than 6 significant strikes per minutes and also is able to rack up points with takedowns. Fishgold certainly has the power to end this one early, but if Gordon can avoid an early knockout, I think he can pile on points and even rack up a submission/KO win in the later rounds.

I think Molly McCann is solid mid-tier option today in her match-up agianst Taila Santos. McCann is a very active fighter that will throw at a high-volume while also looking for takedowns & advances. Over her last three fights, McCann has scored well in each of her three victories (all by decision) and I see a similar outcome tonight in which she just racks up points between significant strikes, takedowns, and advances en-route to a victory.

Rounding out the team, we’re going to go with the Lerone Murphy in his match-up agianst Ricardo Ramos. Murphy is a perfect 8-0 in his professional career and I think as we only had $14 let, I think he gives us the most upside for the salary we had left.