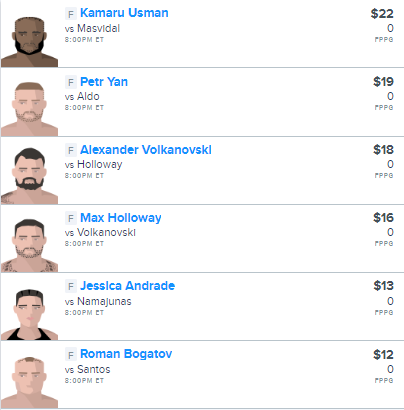 Where to Watch: ESPN/ESPN+ Stream live sports and exclusive originals on ESPN+. Sign up now!

It is hard to contain the excitement I have for UFC 251 tonight!

This is such a great lineup and with three championship fights, you better believe I’ll have it on my big-screen with a few beverages beside me tonight (Sarah….if you reading this, I already apologize for what will be me taking over the big tv tonight!).

It will also be entertaining to see all the action taken place at UFC’s “Fight Island”!

DON'T FORGET TO CHECK OUT OUR DRAFTKINGS LINEUP FOR UFC 251!!!

For tonight’s lineup, I’m going to really have heavy exposure in the three championship fights.

For Usman vs. Masvidal, I can’t get away from what I feel is great value and high-upside with the current champion, Kamaru Usman. I like Masvidal and with his odds and certainly had the ability to win this fight, however, Usman is just in my opinion, one of the best that the UFC has to offer and is just strong in every category. Masvidal has great experience, but I’m a bit concern of the massive weight cutting and short-term notice of the fight, and between the fact that I think Usman lands significant strikes at a high rate and could even end this early with his superior wrestling game, I’m going with Usman.

In the Volkanovski vs. Holloway fight, I am going to roster both Alexander Volkanovski & Max Holloway.

In their first match-up, both fighters combined for a total of 176 points and I wouldn’t be surprised to see them both surpass that tonight as both fighters are high-volume offensive strikers and that I expect this one to once again go the distance.

I like Volkanovski to win this one again which warrants his higher price tag, however, as I think Holloway will be able to land a high volume in his own regard, I still think he’ll hit value at his $16 price tag.

In our 3rd championship fight with Yan vs. Also, I’m confident that Petr Yan will be able to have a dominant performance agianst Jose Aldo. Yan has solid power and between being an aggressive fighter that lands at good volume, has had very solid success in ending fights early. Aldo is one of the all-time greats, however, he has lost 4 of his last 6 fights and I just don’t see him lasting five rounds with Yan in this one.

Rounding out our team, we are going to be going with Jessica Andrade and Roman Bogatov.

Andrade was able to win her first match-up agianst the talented Rose Namajunas and although she is a heavy underdog, she does have knockout upside.

Bogatov is going to be our extreme value pick in his match-up agianst Leonardo Santos. Bogatov will be making his UFC debut tonight, however, does come into this match-up with a 10-0 professional record and is a very solid wrestler. Bogatov will have youth on his side as he is 11 years younger than Santos and I think if he can score multiple takedowns and get a win by decision, he’ll hit value at his $12 price tag.