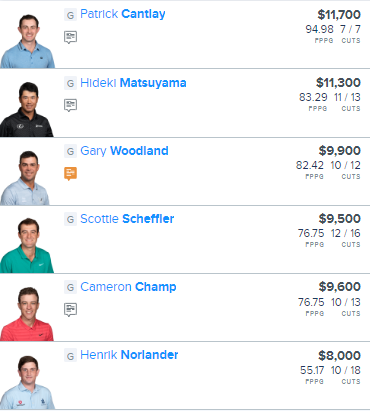 We had a solid bounce back last week at the Rocket Mortgage Classic as despite a missed cut by Scottie Scheffler, we had no problem cashing in both our 50/50’s & GPP’s with outstanding performances by Bryson DeChambeau, Matthew Wolff, & Mark Hubbard.

Let us keep the winning going as we look at our FanDuel lineup for the Workday Charity Open that will be taking place at Muirfield Village in Dublin, Ohio.

In terms of the historic Muirfield Village, the course is a Par 72 and is going to play about 7,400 yards. Muirfield Village does have four Par-5’s which favorite the long hitters, however, this is more of a ball-strikers golf course and we’re going to be focusing more on golfers who have strong SG: Tee-to Green & SG: Approach The Green.

Let’s take a look at our FanDuel lineup:

DON’T FORGET TO CHECK OUT OUR DRAFTKINGS LINEUP FOR THE WORKDAY CHARITY OPEN!!!

The core of our team will consist of Patrick Cantlay, Hideki Matsuyama, & Gary Woodland.

Cantlay is one of my favorite golfers to roster as he is one of the best all-around golfers on the PGA. I stayed away from him from the Travelers as I was worried about the long lay-off, but I was mistaken as Cantlay looked sharp, finishing T-11th with a closing round of 65. Cantlay was outstanding at Muirfield Village last year in his win at the Memorial Tournament as he currently ranks 7th in SG: Tee-to-Green & 5th in SG: Approach The Green, I don’t see why he can’t pick up another win in this tournament.

Matsuyama is another former winner at Muirfield Village and despite some putting issues last week, racked up an impressive 22 birdies and was one of the best in terms of SG: Tee-to- Green. Matsuyama looked like he was rounding back into form over his last two rounds last week and I think he’ll be at the top of the leaderboard come Sunday as he comes into this tournament ranked 2nd in SG: Tee-to-Green & 6th in SG: Approach The Green.

Woodland was one of the many golfers that disappointed many DFS players at the Travelers Championship with his missed cut, however, I’m not shying away from the former Kansas Jayhawk as he has too much value at $8,300. Woodland has struggled around the greens this season, but he has solid distance to score on the Par 5th and comes into this tournament ranked 37th in SG: Tee-to-Green & 10th in SG: Approach the Green.

As I mentioned above, Scottie Scheffler disappointed us last week, however, I think this is great opportunity for a bounce back from Scheffler this week. Scheffler has looked a bit rusty since the return but looked like he found his game in Round 2 last week firing off a bogey-free round of 65 (-7). Scheffler is a solid iron player despite putting up less then average numbers lately and also comes into this tournament ranked 29th in SG: Tee-to-Green.

Cameron Champ isn’t the protocol golfer that I’m looking to target this week, but even on courses where distance isn’t critical, it’s hard to doubt that no matter what the course, the distance helps. Champ has looked great since the PGA returned, finishing T-12th at the Rocket Mortgage Classic & T-14th at the Charles Schwab Challenge and comes into this tournament ranked 1st in SG: Off-the-Tee & 20th in SG: Tee-to-Green.

Rounding out the team, we are going to go with some nice value in Henrik Norlander. Norlander is coming off an impressive T-12th (-14) at last week’s Rocket Mortgage Classic and has gone under 70 in seven of his last eight rounds. Norlander strongest attribute is his SG: Approach the Green (ranked 67th) and should be able to take advantage of the four Par 5’s.

The pick in this article is the opinion of the writer, not a PickDawgz site consensus.
Previous Pick
DFS - GOLF - FanDuel - Rocket Mortgage Classic - 7/2/2020
Next Pick
DFS - GOLF - DraftKings - Workday Charity Open - 7/9/2020