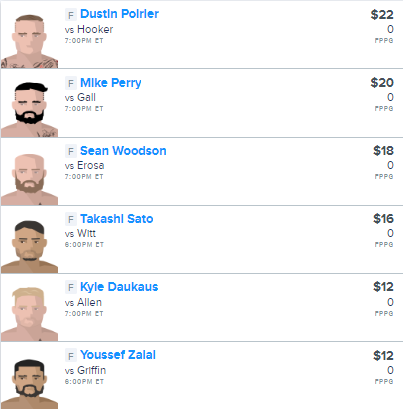 UFC is back in action tonight as we have UFC on ESPN 12 at the UFC APEX in Las Vegas that starts at 6:00 PM tonight.

DON'T FORGET TO CHECK OUT OUR DRAFTKINGS LINEUP FOR UFC ON EPSN 12!!!

We’re not going to mess around and we’re going to pay up for the two highest priced fighters in Dustin Poirier & Mike Perry.

Poirier will have his hands full Dan Hooker, however, I expect this to be an impressive bounce back performance for the UFC veteran. Poirier lands almost 6.0 significant strikes per minutes and as I think he is going to score well whether or not he gets the KO, I think he is worth the high price tag.

Mike Perry is an interesting guy as if you haven’t already heard, he has ditched all his coaches and will only have his girlfriend in his corner. At the same time, Perry has some great power which I think will favor him in the smaller octagon at UFC APEX. Perry will need to try and keep this one on his feet and as I think Gall is just not in the same class as Perry, I’m expecting a KO by Perry early in this one.

I’m really high on both Sean Woodson & Takashi Sato in their match-ups tonight and expect them to be highly owned with their mid-range prices.

Woodson will be up agianst Julian Erosa who took this fight on short notice and has yet to win in the UFC.

Sato will be up against Jason Witt who also is coming into this fight on short notice as Sato’s original opponent, Ramiz Brahimaj, had to withdraw after one of his cornerman came down with COVID-19. Witt will be fighting in his first UFC fight and just doesn’t have the talent to match-up with Sato in this one.

Rounding out our team, we’re going with two upsets in Kyle Daukaus and Youssef Zalal.

Daukaus comes in as a big underdog against Brendan Allen, however, I’m not buying into Allen’s first two impressive UFC performances and like the prospects of Daukaus who has eight submission victories to his 9-0 professional record. Daukaus will be making his UFC debut tonight and I think he impressive with an upset submission win over Allen.

Zalal looked good in his UFC debut victory over Austin Lingo and I think he is far to cheap at just $12 to pass up on in his match-up agianst Jordan Griffin.