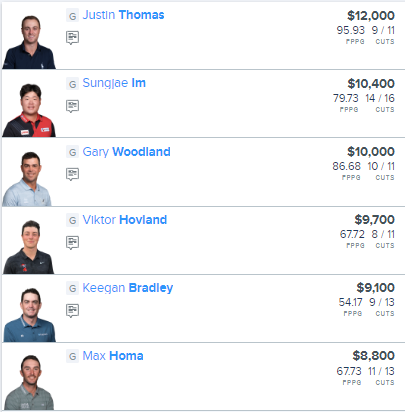 Hope everyone is having a good week and is ready for some solid PGA action with one of my favorite tournaments in the Travelers Championship.

Before I get to anything golf related, just wanted to wish my wife a very happy birthday! Between my 9-5 and all the time I spend with DFS and sports in general, I know I’m the luckiest guy out there!

It is a bit bittersweet when it comes to the Travelers Championship as this is generally the PGA event that I attend in person as I’m only a few hours away from TPC River Highlands which is located in Cromwell, CT. Although I will not be able to attend this year, I am still pumped for this tournament as it is always one of the most well-liked tournaments by the golfers and once again has a packed field.

We are going to have to keep a close eye on the news leading up to Thursday AM as many golfers have had to withdraw from the tournament due to COVID-19 and other reasons. As of right now, Brooks Koepka, Webb Simpson, Graeme McDowell, Cameron Champ, and Chase Koepka all have WD.

In terms of the TPC River Highlands, like the courses we have seen over the past two weeks, being a great ball-striker is critical for success at this course. There are a few holes in which Driver will come into play, but this really is a course that it is important to get in the fairways and stick your approach shots. We will once again for the most part focus on solid ball-strikers.

Let us go ahead and look at who we are going to roster for our FanDuel lineup.

I like Bryson DeChambeau this week, but I expect him to be the highest owned “big-money” player that will be roster and personally, I like Justin Thomas just as much, if not more this week. Thomas has rostered two Top-10’s since the PGA returned and closed the final three rounds of last week’s RBC Heritage shooting 66-66-63. Thomas currently ranks 5th with SG: Approach-The-Green (1.057) & 3rd in SG: Tee-To-Green (1.732) and I think we see him contending for the championship on Sunday.

Sungjae Im missed the cut last week, but I expect a big bounce back from him this week on a course that fits his game well. Im has made 14 of 16 cuts this season with 6 top-10’s and is a solid iron player which ranks 35th in SG: Approach the Green (.464) & 19th in SG: Tee-To-Green. Im did get some exposure last season to TPC Highlands in which he finished a respectable 26th place, which included a solid 66 in the final round, and I think he will be in the top-10 by the end of the weekend.

Gary Woodland is not as much as a value on FanDuel as he is on DraftKings, but I still like his value at his $10,000 price-tag. Woodland has not played in the Travelers Championship since 2016, however, is style is perfect for this course and comes into this tournament ranked 7th in SG: Approach-The-Green.

Viktor Hovland is one of the many exciting young players currently on the PGA Tour and has been solid since the PGA has returned, posting top-25’s in both the RBC Heritage & Charles Schwab Challenge. Hovland has shown his ability to go as had rounds of both 65 & 66 last week and also has some experience as TPC River Highlands as he was able to make the cut last year in a performance in which he finished T-54th. Hovland currently ranks 9th in SG: Off-The-Tee (.649) & 24th in SG: Approach-The-Green (24th) and I think brings nice value this week.

If you have followed me for a while, you know I am a fan of Keegan Bradley to the point that even though all the big names have been at the Travelers, I’m generally following Keegan around. What I have learned over the past few years is that Keegan loves playing in the Northeast (went to school at St. John’s) and that he generally does well at TPC River Highlands. Bradley best attributes include that he is an accurate driver and solid ball-striker which is why we have seen him plenty of success her. I faded Keegan at the recent Charles Schwab Challenge as I was a bit afraid of some rust, however, after four sub-70 rounds, I think he is going to have a big week, similar to what we saw last week after posting a T-2.

What does Max Homa have to do to get some respect in terms of his DFS pricing! Homa has made 11 of 13 cuts this season with three top-10’s and I think has some of the best value on the slate as his two strongest categories include SG: Off-The-Green (36th; .377) & SG: Approach-The-Green (52nd; .330).

This is a cash lineup, however, I still will throw it into a GPP or two just in case it goes off for a big day!