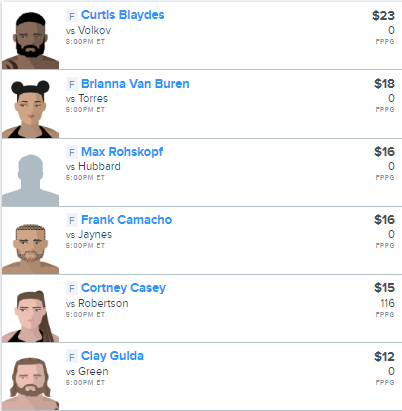 UFC is back in action tonight as we have UFC Fight Night 173 at the UFC APEX in Las Vegas that starts at 5:00 PM tonight.

DON'T FORGET TO CHECK OUT OUR DRAFTKINGS LINEUP FOR UFC FIGHT NIGHT 173!!!

We’re not going to mess around and going to start off our lineup by paying for the highest priced fighter of the night in Curtis Blaydes in his matchup agianst Alexander Volkov. Blaydes comes in as the heavy favorite (-390) and has basically dominated everyone not named Francis Ngannou. Blaydes has solid power and is a great wrestler, averaging almost 7 takedowns per 15 minutes. Blaydes has a good chance of ending this one early, however, even if he can’t secure the KO, he should be able to pile up points over 5 rounds and get a win by decision.

Also at a high price, we’re going to be rostering Brianna Van Buren in her match-up agianst Tecia Torres. Van Buren has a ton of talent and like Blaydes, is a very impressive wrestler. Van Buren is an active fighter that should be able to take advantage of the smaller octagon at UFC Apex and I think will rack up 90-100 points tonight.

Max Rohskopf will be looking to take this match-up agianst Austin Hubbard to the ground and if he does, I think he’ll make quick work of Hubbard.

Frank Camacho should be a popular play tonight as his original opponent, Matt Frevola, had to be pulled late due to one of his cornerman testing positive for COVID-19. Camacho will be up agianst newcomer Justin Jaynes who although I like his nickname (“Guitar Hero”), I just don’t think he is going to put up much of a fight against Camacho tonight.

Courtney Casey comes into her match-up agianst Gillian Robertson as a slight underdog, but I like this match-up for Casey, especially after seeing Casey look impressive agianst Mara Romero Borella in her 1st round submission victory just over a month ago. Casey is an aggressive fighter who should continue to attack Robertson and as long as Casey keeps on her feet, I think she end this one early.

Unlike our DraftKings lineup, we had to try find so more value than Lyman Good and we’re going to take a chance with the experienced, Clay Guida. Guida is as tough as they come and is decent in terms of taking opponents down to the mat. Green is just 1-5-1 over his last 7 fights and although he is the heavy favorite, I think Guida could be a sneaky play tonight.