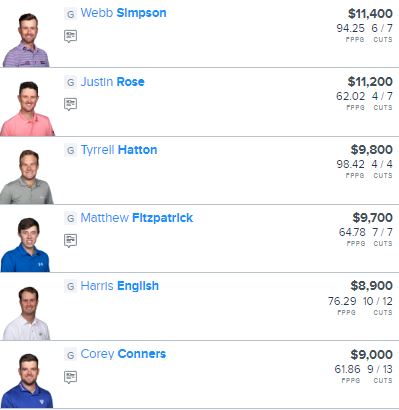 The PGA had a great first week at the Charles Schwab Challenge and we are going to see another great field at the RBC Heritage this week.

The RBC Heritage will be held at the Harbour Town Golf Links which similar to last week’s course (Colonial CC), is going to be a shorter than normal course in which solid ball striking and solid games around the greens will be critical for success.

Harbour Town Golf Links is a Pete Dye course, so we took a lot of time looking at players who have solid iron games and have had success on Pete Dye courses in the past.

DON’T FORGET TO CHECK OUT OUR DRAFTKINGS LINEUP FOR THE RBC HERITAGE!!!

Kicking off our lineup, we are going to pay up for Justin Rose. Rose looked sharp last week at the Charles Schwab Challenge as he went sub-70 in all four rounds, which included an opening round of 63, and finished T-3 (-14). Rose surprisingly split from his long time swing coach in Sean Foley today, but I’m not concerned about that affecting his performance here as Rose as been one of the best on Pete Dye courses since 2014, ranking 6th in the PGA with 2.649 SG: Total.

Webb Simpson disappointed me and many other DFS players last week, but that is no reason not to go right back to him at Harbour Town Golf Links. Simpson currently ranks 10th in SG: Approach the Green, 38th in SG: Around the Green, & 26th in SG: Putting and as he ranks 8th on Pete Dye course since 2014, he is one again a must-play in my opinion.

Tyrrell Hatton was playing some of the best golf of his career prior to the break, which including take home the championship at the Arnold Palmer Invitational. There is a bit concern of some rust for Hatton, however, as he currently ranks 1st in SG: Approach the Green 7 1st in SG: Tee-to-Green, I’m happy to roster Hatton at $8,000.

Matthew Fitzpatrick was decent last week posting sub-70 scores in all four rounds and as his style of play that fits this course perfectly. I think Fitzpatrick will make a run this week and I’m putting in a side bet that he finishes in the top-5.

Similar to Webb Simpson, Harris English had a very disappointing performance for our roster last week, however, like Simpson, that’s not going to stop us with going with English at a sub-$9,000 price. English ranks 19th in SG: Tee-to-Green & 14th in SG: Total on the year and I expect a solid bounce back from him this week.

I’m kicking myself for not rolling with Corey Connors as came into last week’s tournament ranked 4th in SG: GIR and he didn’t disappoint after finishing T-19th with a -9. Connors can struggle on the putting green, but the ball striking is there and I’ll take a chance on him this week at a solid price point.