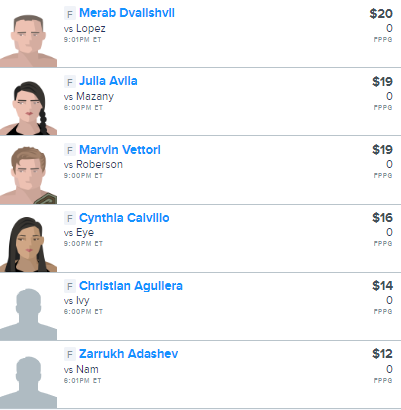 UFC is back in action tonight as we have UFC Fight Night 172 at the UFC APEX in Las Vegas that starts at 7:00 PM tonight.

DON'T FORGET TO CHECK OUT OUR DRAFTKINGS LINEUP FOR UFC FIGHT NIGHT 172!!!

Kicking off our lineup, we are going to be paying up for both Merab Dvalishvili (MVP) & Julia Avila who both come in as heavy favorites in their fights.

I’m not expecting either fighter to end their fight early, but I think both will be able to gather up some solid points with significant strikes and both will soon get KO’s by the end of the 2nd round.

We’re also going to be paying up for Marvin Vettori who comes into his fight agianst Karl Roberson as a -230 favorite. Vettori has a solid all-around game and should have a huge advantage if he can get Roberson on the ground. I’m betting that Vettori will be able to get Roberson to the ground I this one which he will be able to pile up points and get a submission.

The rest of the lineup is going to be some value picks, but I believe Cynthia Calvillo is going to be a popular option as the main fight on this card vs. Jessica Eye. I think this fight is going to go the distance and be close, but I think Calvillo will be able to get a few takedowns and will pile up points over five rounds with solid significant strike numbers.

Rounding out our lineup, we’re going to go with Christian Aguilera & Zarrukh Adashev.

Christian Aguilera comes into his UFC debut against as an underdog, however, I think he has some of the best value on the slate in his match-up agianst Anthony Ivy who also will be making his UFC debut tonight. Ivy has some great knock-out power, however, Aguilera is more of a technical fighter who also has some power himself as 9 of his 13 professional fights have come by KO. Aguilera will need to avoid what I imagine will be an aggressive Anthony Ivy coming out of the gates, however, I think Aguilera has a decent chance to pull the upset in this one and is worth the chance at this price point.

Adashev is taking his fight agianst Tyson Nam on short notice, but I think that plays into our advantage her as he is solid fighter against Nam, who in my opinion is nothing more than average. Adashev comes from a kickboxing background and as I’m not overly concerned about Nam’s ability to do a lot of damage, I think Adashev at worse piles up some points and wins this one by decision.