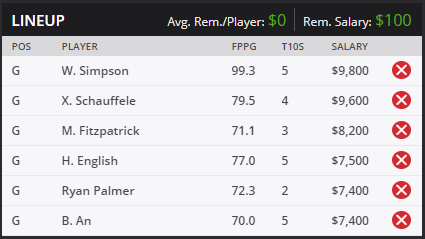 The PGA will be back in action on Thursday as we have a loaded lineup for the Charles Schwab Challenge.

The best in the world will be teeing it up at Colonial CC which although is a shorter course than we generally see on Tour (Par 70, 7,000 yds), still provides plenty of challenges.

I’m going to be focusing on good ball-strikers and individuals that have solid GIR’s as this is a course where you need to hit the smaller greens to score well.

We’re going to be paying up both Webb Simpson & Xander Schauffele as I think they both fit this course extremely well.

Simpson has picked up five top-10’s this season, including a win at the Waste Management Phoenix Open, and currently ranks 7th this season in GIR %. Simpson has a solid short game as he currently ranked 13th in SG: Putting and although he is going to be a very popular pick this weekend, I think he has just too much value at a sub-$10,000 to pass up on.

Schauffele is another solid player when it comes to GIR %, currently ranked T-9th. Schauffele has missed the cut at Colonial CC the last two years, however, did show his upside at this course with a bogey-free round of 67 in Round 2 last year. Schauffele is has made 8 of 9 cuts this season and was playing well prior to the break as he has four straight top-25 finishes.

Matthew Fitzpatrick has not fared well for us in the past, however, you always have to take a look at him when it comes to tournaments in which distance off the tee isn’t a huge factor. Fitzpatrick is one of the best ball-strikers in the game and I think he is going to play better without having a crowd around.

We got plenty of exposure to Harris English in our lineups earlier in the season and he has really paid off as English has made 10 of 11 cuts, including five top-10’s. English ranks 5th in GIR % this season and I think we see an outstanding performance from him this week.

I’m going with what will be another popular pick in Ryan Palmer who plays Colonial CC as his home course. Palmer has been consistent this season, making 8 of 9 cuts and I would not be surprised to see his name near the top of the leaderboard going into the weekend.

Rounding out our team, I’m going with Byeong Hun An. Don’t get me wrong, An scares me a bit as he has burned us plenty in the past, however, there is just too much value for the upside he brings at $7,400. An ranks 14th in SG: Tee-to-Green and 4th in SG: Around-the- Green and was playing well before the break, coming in T-4th at the The Honda Classic & T-9th at the Waste Management Phoenix Open.