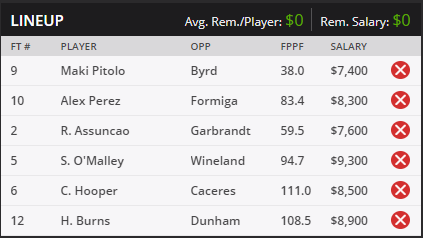 UFC is back in action tonight as we have UFC 250 at the UFC APEX in Las Vegas that starts at 6:20pm tonight.

For our heavy hitters, we’re going to be paying up for both Sean O’Malley and Herbert Burns!

Sean O’Malley has dominated the UFC in impressive fashion as he has a 3-0 record (11-0 overall) which included an impressive knockout of Jose Quinonez in his last fight. O’Malley is one of the top raising prospects in the bantamweight and generally comes out swinging as he is averaging almost 7.0 significant strikes per minutes. O’Malley will be up against a talented veteran in Eddie Wineland, however, this is a fighter that hasn’t won since 2016 and as O’Malley is the younger, more dangerous fighter, I think he pays off at the high price.

Herbert Burns will try to follow-up his brother’s (Gilbert Burns) incredible performance recently and will be working on picking up his 2nd UFC win after he took care of business against Nate Landwehr in his UFC debut by knocking him out in the first round. Burns will be up agianst Evan Dunham who although has some nice experience comes into this fighting losing his last three matches and has not fought for almost two years. I think Burns makes quick work here with another knock out.

Chase Hopper has not yet tasted defeat with an overall record of 9-0 and is recently coming off a TKO victory agianst Daniely Teymur this past December in his UFC debut. Hopper likes to attack his opponents which is great in terms of DFS and faces Alex Caceres who has not had the best UFC career, coming into this match-up with just an overall UFC record of 10-12.

Alex Perez is where I think we will create some separation from other teams tonight as I like his match-up against Jussier Formiga. Perez has won 6 of his last 7 fights including an impressive victory over Jordan Espionosa who he submitted in the 1st round. Perez is an aggressive fighter who average about 4.5 significant strikes per minute and 3.25 TD’s every 15 minutes and I think he gets us a solid point total with somewhat low ownership.

Rounding out our team, we are going to be going with some value picks in Raphael Assuncao and Maki Pitolo.

Assuncao will be up against Cody Garbrandt who although is talented, has not won since 2016 and hasn’t fought for over a year. Garbrandt hasn’t shown the strongest of chins in his recent fights and as I think Assuncao is a savoy fighter that that will keep out of the way of Garbrandt’s haymakers, I think Assuncao will be able to take care of business in this one at a relative low price.

Maki Pitolo is a bit of a gamble but how can you not go with someone with the nickname “Coconut Bombz”! Pitolo has knockout power and I think he will be able to connect and take out Charles Byrd in an upset.