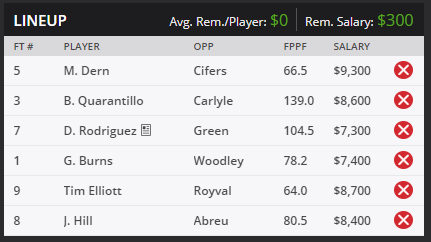 Where to Watch: ESPN/ESPN+ Stream live sports and exclusive originals on ESPN+. Sign up now!

Hope everyone is having a great start to their weekends!

We have some UFC action tonight as we have UFC Fight Night 176 in Las Vegas tonight at the UFC APEX!

Let’s take a look at our DraftKings lineup for tonight!

We’re going to be paying top-dollar with Mackenzie Dern in her match-up agianst Hannah Cifers. Dern is coming off her first loss, but still comes into this match-up with an impressive 7-1 record. Cifers isn’t much of a TKO threat in this one and as she takes about 5.5 significant strikes per minute, I think Dern could rack up the points even if this goes to a decision.

Elliott has struggled a bit as of late, however, I love this match-up agianst Brandon Royval who will be making his UFC debut tonight. Elliott loves to put pressure on his opponents and as he should have some success with takedowns, he is one of my favorite fighters to roster tonight.

Quarantillo was impressive in his UFC debut last December, completely dominating Jacob Kilburn and I think as Quarantillo will be able to take this match to the mat, I think he will win this one by submission tonight.

Hill will have a huge height & reach advantage against Klidson Abreu and if he can avoid takedowns by Abreu, he should walk away with a victory in this one.

We’re hoping that the recent trends of upsets in the “Main Event” continues tonight as we’re going to go with Gilbert Burns. Burns will have his hands full with Tyron Woodley, however, Woodley hasn’t fought in over a year and I think if he can get out of the first round, he’ll will the stronger fighter over the duration of the fight and pick up a win.

Rounding out our team, we’re going with Daniel Rodriguez who will come in as a heavy favorite at a great price as his original opponent, Kevin Holland, had to be pulled from the might due to a shoulder injury. Rodriguez shouldn’t have an issue handing Gabriel Green.