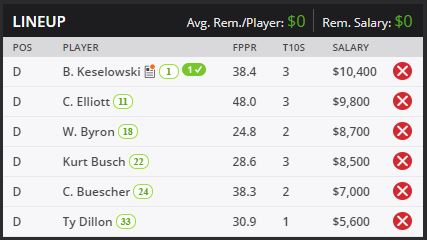 NASCAR is back with the Darlington 400 this afternoon and let us take a look at our first DFS DraftKings lineup for the race!

Kicking off our lineups, we’re going to be paying up for both Brad Keselowski & Chase Elliott.

Elliott has been one of the best drivers in NASCAR this season coming in with three top-10 finishes in his six races this season while piling up points in terms of “Fastest Laps” & “Laps Led” in two of his last three races. Elliott has a solid rating at the Darlington 400 in the past and I think we will see a top-5 performance from Elliott tonight.

For our mid-range plays, we are going to be going with both William Byron & Kurt Busch.

I think Byron is a pretty solid “Cash” play today as he his car was running well prior to the break coming in the top-15 in both the FanShield 500 & Auto Club 400. Bryon has a decent rating in his last two races at the Darlington 400 (76.3) and he has been a popular betting pick early on as his odd of winning have improved from 40-1 to 30-1.

This is a track that plays well for Kurt Busch and despite starting the race at the 22nd position, he should be in a solid spot to make a run for a strong finish. Bush has led over 100 laps over his last three Darlington 400 races and as he has a top five driver rating in that span, is well worth the mid-$8000 price.

Rounding out our team, we are going to with some value in both Chris Buescher & Ty Dillon.

I am shocked that Buescher is priced at just $7,000 as this is a driver who has finished no worse than 17th place in his five races this season, including an impressive 3rd place showing at Dayton. Buescher has a respectable 75.7 rating in his last three races at the Darlington 400 and I think he could have a nice performance this afternoon.

As for Dillion, he has great value at just $5,600 with a solid showing on steep tracks while having some solid history at the Darlington 400.

The pick in this article is the opinion of the writer, not a PickDawgz site consensus.
Previous Pick
DFS - DraftKings - UFC Fight Night 172 - 5/16/20
Next Pick
Darlington 400 NASCAR Fantasy Picks