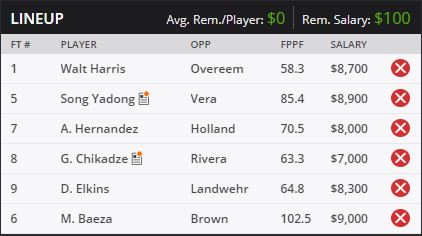 I’m feeling like a kid on Christmas with having so much UFC action going on over the past week! It’s so nice to watch some live sports action right now!

For tonight, we got UFC Fight Night 172 that starts at 6:00pm with the headline fight of Walt Harris vs. Alistair Overeem.

When it comes to the headline fight, we are going to go with what probably will be an extremely popular pick tonight in Walt Harris.

Harris has some of the best knockout power in the game with 5 of his last 6 victories coming by KO’s and although Alistair Overseem also has dangerous knockout power, he has been KO’s 14 times in his career, while also being knocked out in 3 of his last 5 fights.

Harris will have a lot going on in his mind coming back from his absence after taking time off due to the family tragedy he suffered last fall, however, I think he comes out strong in this one and KO’s Overeem by Round 3.

Song Yadong looked like he might miss his fight due to some visa issues, however, as it looks like everything got worked out, he is one of my favorites to pay up for tonight in his match-up against Marlon Vera.

Yadong does a good job of avoiding damage as he is averaging just about 2.75 significant strikes agianst him and between the fact that Yadong has shown that he has KO power and that Vera at times can start matches off slowly, I think Yadong does enough to pick up a victory in t his one.

I am paying up for Miguel Baeza in his match-up agianst Matt Brown. Baeza comes into this match-up undefeated in his young career and I think he keeps that streak going against Matt Brown who through I think will have trouble keeping up with Baeza who is 10 years younger than him.

We’re taking some nice value with Giga Chikadze as he is priced at the minimum at $7,000 and is going against Irwin Rivera who is a last-second replacement for Mike Davis who has to withdrew at the last second due to issues with dropping weight. This is just too much value to pass up on.

Rounding out the team, we’re going to be going with both Anthony Hernandez and Darren Elkins.