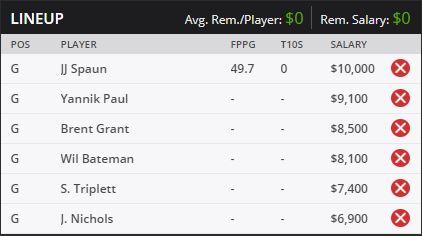 We continue to be limited by the available DFS contests featuring live events, however, we do have some golf tomorrow as the Outlaw Tour will be hosting the GCU Championship in Phoenix, Arizona on Tuesday!

We had some success last week in our first shot at the Outlook Tour as our 50/50’s hit in both roundswhile are GPP lineups cashed in Round 1 and we’re looking to have the same success tomorrow!

If you are new to the Outlaw Tour contests, the contests are based on a round-by-round basis so this lineup is just for the performances in Round 1.

Kicking off our team,, we are going to be paying up for a PGA regular in JJ Spaun. Spaun was not having a great season before the PGA shutdown, however, he did make 3 of his last 4 cuts including a T30th at the Farmers Insurance Open & T47th in the Waste Management Phoenix Open. In the end, this is golfer who had some success on the PGA and should have a clear cut advantage over the majority of the field in both experience and talent.

I follow the Colorado Buffaloes sports programs closely as this is where I went to school so I actually was pretty familiar with the Paul brothers (Jeremy & Yannik) who played their collegiate golf at Colorado.

Both golfers are regular favorites on the Outlaw Tour and I am going to get some more value with the Yannik Paul who in his come in the top-10 in his last three Outlaw Tour Tournaments including 4th and 2nd place performances that last two weeks.

I think Brent Grant has some solid value at $8,500 as this a player that has a few years of professional experience under his belt and has had some nice performances in the Korn Ferry Tour (T-19th at The Bahamas Great Exuma Classic; T-21st at the Country Club de Bogota Championship, & T-12th at the El Bosque Mexico Championship). Grant is not the biggest of guys, but he crushes the ball of the tee and I think he really take advantage of the Par 5’s.

Will Bateman shot sub-70 rounds in 4 of his last 5 outings and is coming off back-to-back top-15 performances in the Outlaw Tour. Bateman certainly has the game to compete and comes at a decent price.

Sam Triplett has not played since Mid-March, but this is a player that was tearing it up in the Outlaw Tour between January and early March as he had 5 consecutive top-10 performances including a win at the McCormick Ranch Open. Triplett currently sits 2nd on the money list for the Outlaw Tour and although there is risk that he is a bit rusty, I think he has too much value at his price point to pass up on.

Rounding out our team, we are taking a chance on Jeff Nichols who I hope that he continues his form that he showed recently at the Arrowhead Classic in which he finished T-7th and shot a 63 in the 2nd round.

The pick in this article is the opinion of the writer, not a PickDawgz site consensus.
Previous Pick
DFS - DraftKings - NFL Madden 2020 - $100K Free Thank You Madden Stream Contest
Next Pick
DFS - GOLF - Outlaw Tour - GCU Championship (Round 2) - 4/29/20