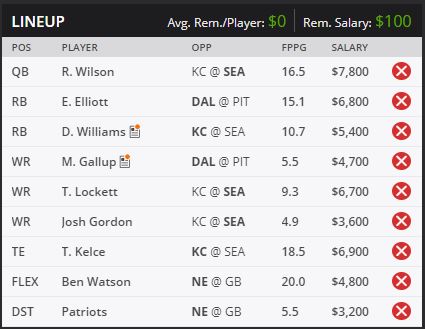 It has been a long April without our DFS leagues, however, we have been working hard behind the scenes to really hit the ground running once we get our beloved sports back!

I have been staying away from simulations for the most part as I just don’t love risking our hard earned profits on simulation matches, however, DraftKings is promoting the $100 Free Thank You Madden Stream Contest tonight as it’s a free contest with a top price of $10,000, let’s give it a go tonight!

We have three games to look at in tonight’s contest with DAL vs. PIT, NE vs. GB, and KC vs. SEA.

On the offensive end, we are going to looking at stacking the Seattle Seahawks as I think they have the best match-up at home against a Kansas City Defense who has the lowest rating team defense on tonight’s slate at 78.

I like paying up for Seattle’s Russell Wilson who I like his ability to rake up points on both the air and the ground and going to pair him with two of his receivers in Tyler Lockett & Josh Gordon.

Lockett has some of the best speed in the game which should be a big advantage in this match-up and I don’t mind the value that Gordon brings as he does have the ability to break off an huge play.

Staying in this match-up, we need to get some exposure to the Kansas City offense and I think both Damien Williams & Travis Kelce have the best value for the Chiefs.

Williams has racked up back-to-back performances of 22.0 & 14.2 points in his last two simulated games and you have to love his value as he is a 3-down back in the game and is their power back they will go to if their at the goal line.

Kelce has averaged 7.5 catches for 97 yards in his last 4 simulated games while putting up an impressive average of 18.6 fantasy points per game during that span. He has Superstar X-factors and I think will have another big game in this match-up.

I am getting some exposure to the Cowboys as I am going to pay up for Ezekiel Elliott & Michael Gallup.

The Cowboys have the best offensive line in the game and on top of Elliott being both a 3-down back and one of the best backs in the game, he is well worth the high price tag. Elliott has averaged over 20 fantasy points in his last three simulated games and I expect more of the same tonight.

Similar to Josh Gordon, I think Gallup is a great value pick at his price point. Pittsburgh will focus on Amari Cooper which should lead to Gallup with the opportunity to break off for a few big plays.

Rounding out our offense, we are going to go with the Patriots Ben Watson. Watson never really got it going in the actual season, however, with the Patriots offense still focus on getting the ball to their TE in Madden, he has been a force lately in the simulated games. In his last three games Watson is averaging 23.7 fantasy points per game which included a monster 44.6 point performance against Houston (12 rec, 176 yards, 2 TD).

For our defense, we are going to go with the New England Patriots as although they have a tough match-up at Green Bay, they have the best secondary in the game with both Gilmore & McCourty that should give Aaron Rodgers some trouble.

Also, check back later as we will have tome DraftKings Outlaw Tour (Golf) Lineups for tomorrow!