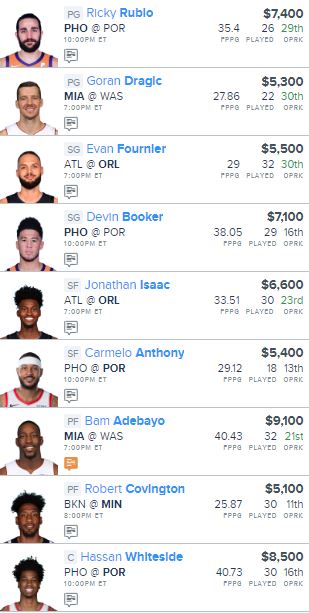 We are going to have plenty of focus on the PHX/POR game tonight as both the Suns & Trailblazers have two of the higher implied totals on the slate and the game is projected to be somewhat close with the Trail Blazers favored by just 4.5 points.

For the Suns, we’re going to be paying up for Ricky Rubio & Devin Booker.

Rubio has posted 39.9 FanDuel points in 3 of his last 4 games played and was outstanding against Portland a couple of weeks ago, posting a triple-double (10 pts, 11 reb, 14 ast). Portland has been a great match-up for opposing PG’s this season and I think that continues tonight for Rubio tonight.

Booker was a bit rusty after returning from a 3-game absence in mid-December, however, looks like he has found his shot as he is coming off back-to-back performances of 32 & 34 points. Booker is still under priced in my opinion at just $7,100 and I think he is worth the roster spot tonight.

For Portland, we’re going to be going with Carmelo Anthony & Hassan Whiteside.

Anthony has been a productive player for the Trail Blazers and has too much value to pass up on at $5,400. Anthony is seeing about 35 minutes a game and as he dominated the Suns recently with a 48.1 FanDuel point performance, I’m willing to go with the veteran tonight.

Hassan Whiteside has been playing outstanding as of late, as outside of his 18.7 point performance agianst Utah, Whiteside is averaging over 50+ FanDuel points per game over his last 6 games.

We’re going with a 2-man stack of Miami Heat in their outstanding match-up against the Washington Wizards. Washington is ranked 30th in points allowed per game & 2nd in pace this season which has made them a popular target to go against this season.

For the Heat, we’re going to go with Goran Dragic & Bam Adebayo.

Dragic has been seeing about 30 minutes per game since returning from his injury and should hit 30+ FanDuel points tonight in this match-up.

Washington’s front court has been really hurt by injuries and they have no one that will be handle Adebayo who put up a monster 50.8 FanDuel point performance (24 pts, 14 reb, 4 ast, 2 blk) agianst the Wizards earlier this season.

Orlando has a great match-up at home agianst the Atlanta Hawks and I’m going to be going with both Evan Fournier & Jonathan Isaac.

Fournier has too much value with $5,500 and should see a decent bump in usage with Aaron Gordon out of the lineup.

Isaac can be a bit inconsistent, however, he has so much upside at his price with his ability to pile up steals and blocks. The Hawks are a young team that rank dead last in the NBA in turnovers and I expect Isaac to have a big game tonight.

Rounding out our team, we’re going to be going with the Timberwolves Robert Covington who should once against see an expanded role as Karl-Anthony Towns looks doubtful while Andrew Wiggins is currently a GTD.