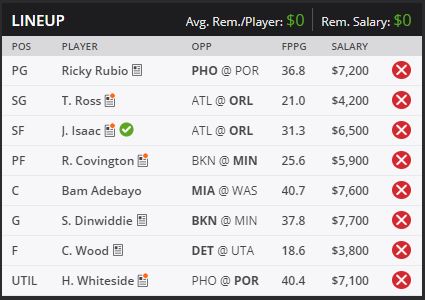 Kicking off our DraftKings lineup tonight, we’re going out to the PHX/POR game and going to roster Ricky Rubio of the suns.

Rubio has posted 41.5 DraftKings points in 3 of his last 4 games played and was outstanding against Portland a couple of weeks ago, posting a triple-double (10 pts, 11 reb, 14 ast). Portland has been a great match-up for opposing PG’s this season and I think that continues tonight for Rubio tonight.

Orlando has a great match-up at home agianst the Atlanta Hawks and I’m going to be going with both Terrence Ross & Jonathan Isaac.

Ross should see be seeing around 30 minutes tonight as I think he gets a bit of extra run with the Magic being without Aaron Gordon and you have to love his value at just $4,200 in a great match-up agianst the Atlanta Hawks.

Isaac can be a bit inconsistent, however, he has so much upside at his price with his ability to pile up steals and blocks. The Hawks are a young team that rank dead last in the NBA in turnovers and I expect Isaac to have a big game tonight.

Karl-Anthony Towns loos doubtful tonight which opens up Robert Covington to have another big game tonight. Covington has averaged 37.5 minutes per game over his last two games and as I expect the same amount of minutes for him tonight, I think he is well worth the affordable $5,900 price tag.

We’re paying up for Bam Adebayo of the heat in his great match-up agianst the Wizards.

Washington’s front court has been really hurt by injuries and they have no one that will be handle Adebayo who put up a monster 50.8 FanDuel point performance (24 pts, 14 reb, 4 ast, 2 blk) agianst the Wizards earlier this season.

We’re going to pay up for Spencer Dinwiddie of the Brooklyn Nets as he should have no problem putting up some decent numbers agianst a Minnesota team that ranks 26th in points allowed & 8th in pace. Dinwiddie is the main option for a Nets team that should put up a decent amount of points tonight.

Christian Wood will be a popular play tonight as he should see some decent action with both Markieff Morris & Blake Griffin looking like they won’t be suiting up tonight. Wood has put up some major numbers in limited time this season as I think he should get around 25 minutes tonight, he should be able to crush value tonight.

Rounding out our team, we’re going with Portland’s Hassan Whiteside.

Hassan Whiteside has been playing outstanding as of late, as outside of his 18.7 point performance agianst Utah, Whiteside is averaging over 49+ DraftKings points per game over his last 6 games.