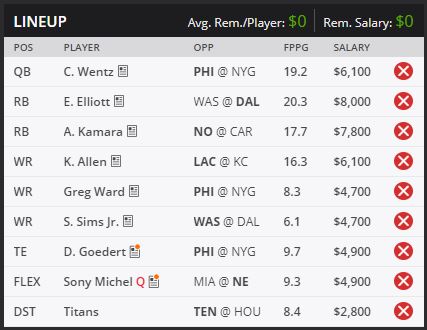 Let’s take a look at our NFL DraftKings “Main Slate” Lineup for today which features 15 games and starts at 1:00pm!

DON’T FORGET TO CHECK OUT OUR NFL FANDUEL “MAIN SLATE” FOR TODAY!!!

For our DraftKings lineup, we’re going to start off with a 3-man stack of Philadelphia Eagles in their important match-up agianst the New York Giants.

Wentz has been playing lights out over the past three weeks despite the numerous injuries he has had to face to his receivers. Wentz will be without his main weapons again today, including Zach Ertz, however, with a match-up agianst the weak Giants secondary, I’m confident in Wentz to deliver and get the Eagles into the playoffs today.

Ward has had at least 60+ receiving yards in each of his last two games and as he should be a top option today against a weak Giants secondary, I think he has great value at just $4,700.

Goedert should once again be a main focal point on the offense with Zach Ertz unavailable. Goedert went off last week for 9 receptions for 91 yards and a TD and I think he sees double digit targets once again agianst the Giants.

We’re paying up at RB today as we’re going with the Saints Alvin Kamara who looked like his old self last week and the Cowboys Ezekiel Elliott.

Kamara and the Saints are still playing for playoff seeding and you have to love his match-up agianst a Carolina Panthers team that has all but given up on the season.

Elliott and the Cowboys need to win to have a shot at the playoffs, and I expect a heavy dosage of Elliott today as he has a great match-up against the Redskins defense, and I expect to see more than normal usage as Prescott seems a bit banged up.

I like Keenan Allen today in a game in which the Chargers should be fighting from behind and will need to throw to try and keep it competitive. Allen has double-digit targets over the last two weeks and as he was productive earlier this season agianst the Chiefs (12 targets, 8 rec, 71 yards, TD), I think he has great value at just $6,100 today.

Sims Jr. has seen 21 targets over his last two games and between the fact that Terry McLaurin is out with a concussion and that the Redskins will most likely be playing from behind, I see another heavy usage days from Sims Jr.

At the FLEX, we’re going to roll the dice a bit with the Patriots Sony Michel. We’ll have to keep an eye to ensure he suits up today, however, if he does, he has great value in an outstanding match-up agianst the Miami Dolphins.  The Patriots running attacked look as good as it did all this season agianst the Bills last week and with Michel averaging 20 carries/game over the last two weeks, I think he could have a big day against the Dolphins.

Houston has already clinched the division which means we’ll see plenty of rest for their primary players. As of right now, it already looks like Deshaun Watson & DeAndre Hopkins are going to see limited to no action today. Due to this, I like the value that the Tennessee Defense brings in a must-win game for the Titans.