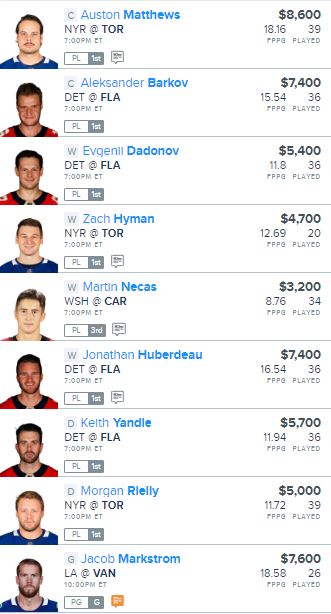 For our lineup tonight, we’re going to focus on the Florida Panthers & Toronto Maple Leafs.

Florida has the best match-up of the night as they are at home agianst the struggling Detroit Red Wings.

It’s already been a long season for the Red Wings as they come into this match-up with just a 9-26-3 record and they have really struggled on the road, posting just a 4-12-2 record. Detroit ranks dead last in the NHL in goals allowed/game (3.92) and have really struggled defending the power play as they rank 30th in PK% at 73.2%.

We’re going back to the Toronto Maple Leafs for the 2nd consecutive night as although there on a back-to-back, it’s hard to ignore their great match-up at home against the New York Rangers.

We are going with a value pick in Carolina’s Martin Necas in his match-up agianst the Washington Capitals. Necas has been a bit inconsistent this season, however, has put up 8 goals & 13 assists on the season and gets a Washington team that has allowed an average of 5 goals per game in their last two road games.

In net, we’re going to be going with Vancouver’s Jacob Markstrom in his match-up against the Los Angeles Kings.