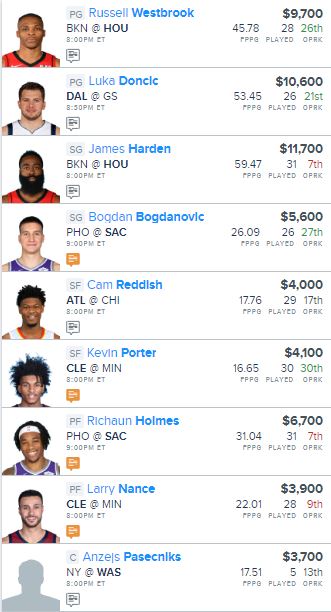 With all the value on the slate tonight, we’re going to pay up for Russell Westbrook, James Harden, & Luka Doncic.

Houston has the highest implied scoring total on the slate tonight in their match-up against the Brooklyn Nets and with Clint Capela sidelined due to heel injury, I love pairing both Westbrook & Harden tonight.

Doncic played 32 minutes in his first game back from his ankle injury on Thursday so we shouldn’t have to worry about his minutes and with a great match-up agianst a Golden State team that could keep this one closer than expected, I think it’s worth spending up for Doncic tonight.

Sacramento has a rough game on Thursday as not only did they lost in double-OT agianst Minnesota, the Kings lost two of their youngest stars in De’Aaron Fox & Marvin Bagley II to injury.

With Fox & Bagley out of the lineup tonight, we should see major minutes for both Bogdan Bogdanovic & Richaun Holmes who combined for 98.5 FanDuel points in their recent game agianst Minnesota.

Cleveland has some great value tonight as Kevin Love has already been listed out and they might be also without rookie Darius Garland.

Larry Nance Jr. becomes almost a must play at just $3,900 and I like Kevin Porter who has about 23-25 minutes a game over the Cavs last three contests and could be in line for some additional minutes/usage if Garland can’t give it go.

Atlanta lost Trae Young due to another ankle injury which makes Cam Reddish a decent value option tonight agianst the Chicago Bulls. Reddish should see 30+ minutes tonight and if he can knock down some threes, he’ll crush value tonight.

To be able to afford Westbrook, Harden, & Doncic, we really needed to go value at center and I’m going to take a shot with Washington’s Anzejs Pasecniks in his home match-up agianst the Knicks. Pasecniks is coming off an impressive 31.7 FanDuel point performance against the Pistons and as he should see at least 20 minutes with all the injuries to Wizards, I think he can hit 5-6x value tonight.