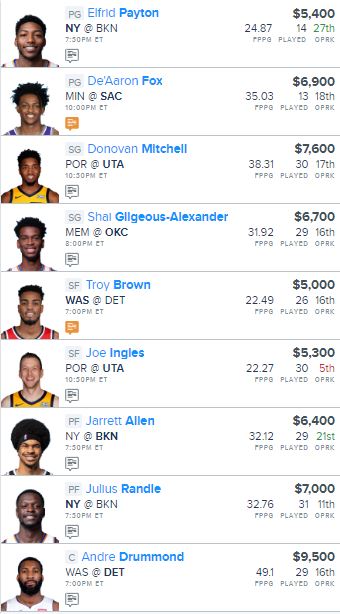 We’re going with a pretty balanced lineup tonight outside of paying up for Andre Drummond in his great match-up against the Washington Wizards.

At PG, we’re going with Elfrid Payton of the Knicks & De’Aaron Fox of the Kings.

Both Payton and Fox have some of the highest upside on the slate and both come in at reasonable prices.

Payton has averaged about 36 FanDuel points per game over his last two contests and now that he is back fully healthy, he is seeing about 30 minutes per game.

Fox has put up at least 30 FanDuel points per game since returning from injury and is coming off a monster 50.8-point performance agianst Houston. Sacramento has a great match-up against Minnesota who plays at the 8th fastest pace in the league and I think Fox should be in for a big game tonight.

Oklahoma City has a great match-up against the Memphis Grizzlies tonight and we’re going to make sure we get Shai Gilgeous-Alexander in our lineup.

To create some separation from the other teams tonight, we’re going to fade Bradley Beal and instead go with the Jazz’s Donovan Mitchell who I think can put up about 40 FanDuel points tonight in a decent match-up agianst the Portland Trail Blazers.

We’re also going to go with Utah’s Joe Ingles who is underpriced at just $5,300 concerning he has put up at least 29.8 FanDuel points per game in 7 of his last 8 games.

At PF, we’re going to pay up for the Nets Jarrett Allen & Knicks Julius Randle.

Rounding out our team, as we wanted to get at least some exposure with the Wizards, we’re going to be going with Troy Brown who is coming off a 53.3-point performance on Monday.