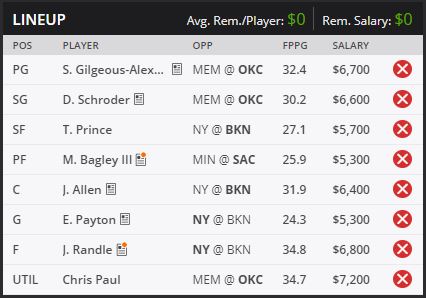 We’re going with a pretty balanced lineup tonight. The Wizards/Detroit game is going to be quite popular tonight as they have the highest implied total, however, DraftKings has really adjusted the prices on the Wizards (Gary Payton II at $5,800 after one good game!!!!). We’re actually going to take a chance and fade the WAS/DET match-up all together.

We’re loading up on the Oklahoma City Thunder tonight as I love their match-up against the Memphis Grizzlies and they will be without one of their main players in Danilo Gallinari.

We’re going with both Taurean Prince & Jarrett Allen of the Brooklyn Nets.

We saw Washington’s Troy Brown go off against the Knicks on Monday and I think Prince has a great chance to put up 35-40 DraftKings points in this match-up.

Allen has been outstanding this season and has some of the highest upside at the Center position tonight.

Staying in this match-up, we’re going with the Knicks Elfrid Payton and Julius Randle.

Payton has averaged about 35 DraftKings points per game over his last two contests and now that he is back fully healthy, he is seeing about 30 minutes per game.

Randle is coming off a monster 50.75 DraftKings point performance this past Monday and I think should once again see major usage in tonight’s match-up.

Rounding out our team, we’re going to Marvin Bagley III who I think has great value at just $5,300.