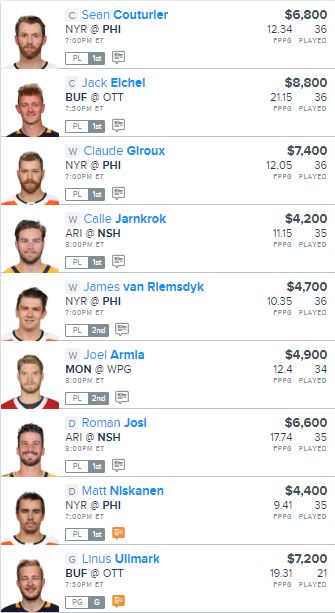 For our lineup tonight, we’re going to put an emphasis on getting plenty of exposure of the Philadelphia Flyers in their great match-up against the New York Rangers.

The Rangers have been nothing more than average this season and has struggled especially on the defensive side of the puck. The Rangers come into this game ranked just 23rd in goals allowed/game (3.17) and 30th in shots allowed per game (34.7). The Rangers commit a bunch of penalties as they rank T-7th in minor penalties (133) and just 18th in PK% (83.4%).

Jack Elchel is the star I want to spend up for today in his match-up against an Ottawa Senators team that despite playing well as of late, still is very weak defensively. Elchel has been on fire as of late averaging over 27 FanDuel points per game over his last five games.

I’m going with a pair of Nashville Predators in Calle Jarnkrok and Roman Josi in their home match-up agianst the Arizona Coyotes.

We’re going with some decent value with Montreal’s Joel Armia of the Montreal Canadiens in his match-up against the Winnipeg Jets.

In net, we’re going with some great value with Buffalo’s Linus Ullmark who has great value at just $7,200 in his match-up agianst the Ottawa Senators.