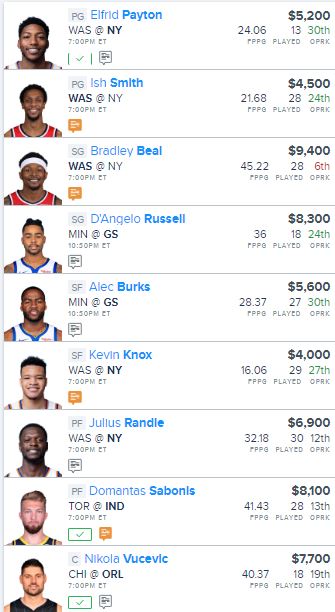 Update (6:53 PM) - Made some updates as I wanted to go with more of a WAS/NY game stack! Image is updated!

For our NBA team, we’re going to kick it off with a 3-man stack of Washington Wizards in their great match-up agianst the New York Knicks.

The Wizards have been hit hard by the injury bug as McRae, Miles, Bertans, Hachimura, & Bryant are all out while Isaiah Thomas is also out due to a suspension.

Staying in this match-up, I’m going to go with Julius Randle of the Knicks who I think has huge upside against the Wizards depleted frontcourt.

Portland has a nice match-up against the New Orleans Pelicans tonight and we’re going to pay up for Damian Lillard.

Glenn Robinson has already been listed as out for tonight which I think opens great value for both Damion Lee & Alec Burks.

Domantas Sabonis is going to play tonight despite some hip soreness which didn’t slow him down agianst the Bucks as he put up 19 points, 18 rebounds, 5 assists, 2 blocks, & 2 steals. Toronto is a good match-up for Sabonis and I expect him to put up 50+ FanDuel points tonight.

Rounding out our team will be Orlando’s Nikola Vucevic who is extremely underpriced at $7,700 in a great match-up agianst the Chicago Bulls.