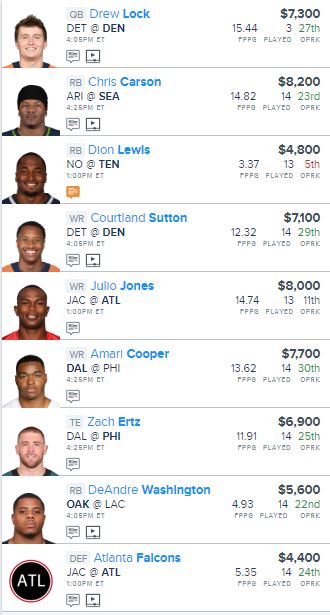 Update (12:28 PM) - Joe Mixon status is a bit unclear as he is battling an illness. I'm taking him out of the lineup. I've updated the image!

Let’s take a look at our NFL Fanduel “Main Slate” Lineup for today which features 11 games and starts at 1:00pm!

DON’T FORGET TO CHECK OUT OUR NFL DRAFTKINGS “MAIN SLATE” FOR TODAY!!!

We’re going to be leading off our team with a 3-man stack of Denver Broncos in their great home match-up agianst a struggling Detroit Lions team.

I love the value that the Broncos bring to today’s slate against a Detroit team that comes in on a 7-game losing streak while giving up an average of 27 ppg during their losing streak. Detroit has also really struggled agianst opposing passing attacks as they come into this match-up ranked 30th in total passing yards allowed (4041) and 28th in passing TD’s allowed (30).

Weather can always be an issue in Denver, but you could ask for better conditions in Denver today as it’s going to be in the high 60’s with little to no wind.

Fant is a bit of a risk on FanDuel as we won’t be able to confirm his status prior to the 1:00pm kick-off, however, reports from this AM look like his trending towards playing today and could have a big game with low ownership if he does.

I’m pairing both Devonta Freeman & Julio Jones of the Atlanta Falcons as you have to love their changes for a big offensive day against a Jacksonville Jaguars team that looks like has no desire to take the field for the rest of the season.

Jacksonville has been terrible against the run this season which should lead for a big game for Freeman who has been averaging 15+ touches of the backfield over the past three weeks.

Jones saw an incredible 20 targets last week in the first game the Falcons were without Calvin Ridley and should see plenty of usage in a beatable Jaguars secondary.

At our other RB, we’re going with Cincinnati’s Joe Mixon. Mixon has been a monster of the past two weeks, rushing for 282 yards on 48 carries while also seeing at least three targets out of the backfield in each of the last three weeks. Miami has one of the worst rushing defenses in the NFL and as the winds are going to be 20+ mph down in Miami today, I expect Mixon to get all the action he can handle.

The Dallas/Philadelphia game should be a fun one to watch this afternoon and I need to get Amari Cooper in our lineups with how bad the Eagles secondary has been this season. Cooper should have no problem creating separation agianst Jalen Mills today and I see him having a huge game in a must-win game for the Cowboys.

We’re going to go with what will be the very popular DeAndre Washington today. Washington will get the start with Josh Jacobs not suiting up this weekend and just has too much value to pass up on at $5,600.

For our defense, we’re going to go with the Atlanta Falcons as I just don’t see Jacksonville bring much of an effort today and I expect Atlanta to give the limited Jaguars offense some trouble.