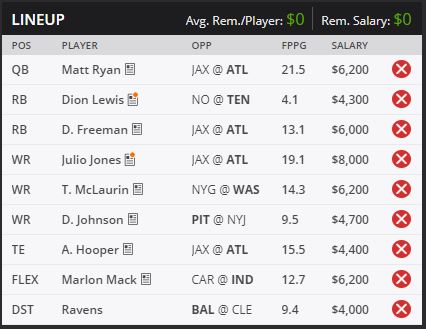 Update (12:28 PM) - Joe Mixon status is a bit unclear as he is battling an illness. I'm taking him out of the lineup. I've updated the image!

Let’s take a look at our NFL DraftKings “Early Only” Lineup for today which features 7 games and starts at 1:00pm!

We just posted our NFL “Main Slate” lineups for both FanDuel & DraftKings so don’t forget to check those out!

DON’T FORGET TO CHECK OUT OUR NFL FANDUEL “EARLY ONLY” FOR TODAY!!!

Keeping this one pretty short!

Going to be going with a full stack of the Atlanta Falcons in their great match-up agianst the Jacksonville Jaguars!

At our other RB, we’re going with Cincinnati’s Joe Mixon. Mixon has been a monster of the past two weeks, rushing for 282 yards on 48 carries while also seeing at least three targets out of the backfield in each of the last three weeks. Miami has one of the worst rushing defenses in the NFL and as the winds are going to be 20+ mph down in Miami today, I expect Mixon to get all the action he can handle.

Terry McLaurin has been outstanding for the Redskins in his rookie year and I think he continues to pile on the stats in his great match-up agianst the Giants this afternoon.

We’re getting some value at our other WR spot in the Jaguars Chris Conley. DJ Chark Jr. is back active today, however, Conway still is a deep threat for a Jaguars team that should be playing from behind today.

For our defense, we’re going to be going with the Baltimore Ravens who should come out strong today as they have a chance to clinch the top-seed in the AFC and I imagine will want to get some revenge after Cleveland dismantled their defense earlier this season.