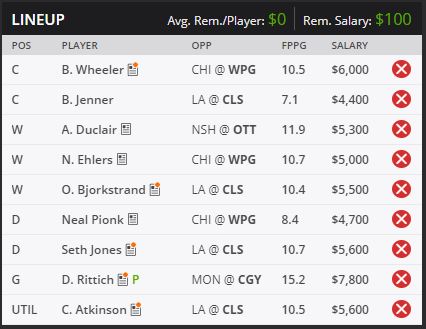 Winnipeg has an outstanding match-up agianst the Chicago Blackhawks who are on the 2nd half of a back-to-back and are coming off a tough game last night in a 4-1 loss to the Colorado Avalanche.

The Blackhawks have lost their last three road games while giving up at least 4 goals in each of those games. Chicago currently ranks just 20th in goals allowed/game and just 17th in PK%.

For the Jets, we can’t afford the top-line like we do on FanDuel, however, I do like the 2nd line just as much and we’re going with Blake Wheeler, Nikolaj Ehlers, and Neal Pionk.

Columbus has one of the best match-ups on the slate as they’ll be at home agianst the Los Angeles Kings.

We’re also rostering Ottawa’s Anthony Duclair who I think is underpriced at just $5,300 as he has nice match-up against the Nashville Predators that have had shaky goaltending all season and comes into this game with 19 goals & 7 assits.

In net, we’re going to go with Calgary’s David Rittich in his home match-up agianst the Montreal Canadiens.