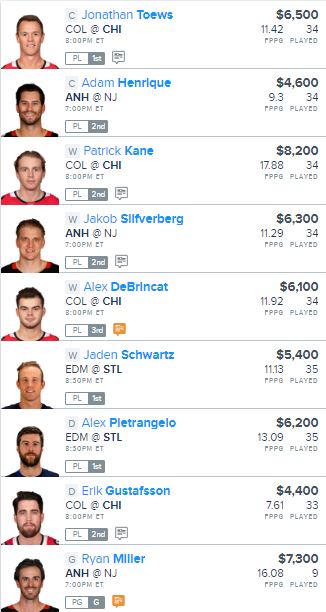 For the Blackhawks, we’re going to spending up for their top line of Jonathan Toews, Patrick Kane, Alex DeBrincat, & Erik Gustafsson.

Toews & Kane have been solid as of late, averaging about 43 FanDuel points per game over their last three games and I like pairing them with both with DeBrincat & Gustafsson who are also part of the top power play line tonight.

Colorado has been solid this season, however, they are missing their best defenseman in Cale Makar and has allowed 5 goals in two of their last four games.

For Anaheim, we’re going with some solid value in their 2nd line with Adam Henrique & Jakob Silfverberg while also getting some value in Ryan Miller in net.

The Ducks have one of the better match-ups of the night as their going up against a New Jersey Devils team that ranks 30th in goals allowed/game (3.47) and have struggled on the power play all season.

St. Louis gets a tough match-up agianst the Edmonton, however, the Blues have been outstanding at home and Edmonton certainly isn’t any defensive juggernaut.

The Blues are a solid 11-4-3 at home this season and I think they pick up another win tonight behind solid efforts from Jaden Schwarz & Alex Pietrangelo.