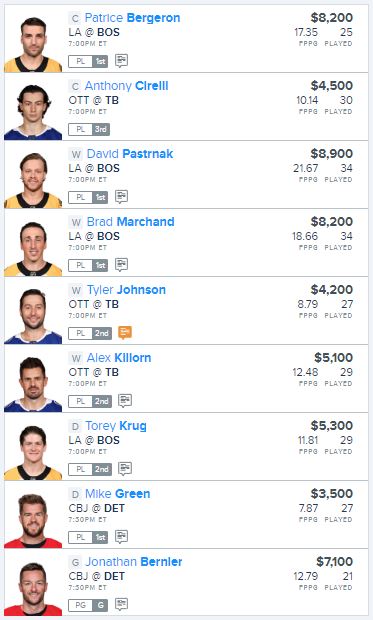 We’re paying up for the Boston Bruins tonight as they have best match-up on the slate at home against the Los Angeles Kings.

Boston has been lights out at home this season, coming into this match-up with a 12-1-5 record and should have little trouble notching another win agianst a Los Angeles Kings team that has just 31 points on the season while posting a 4-12-2 road record.

We’re also going with a stack of Tampa Bay Lighting as they are in a great spot against the Ottawa Senators that are on the 2nd half of a road back-to-back.

Ottawa is just 5-13-2 on the road this season and have really struggled on the road as of late allowing an average of over 4.0 goals per game in their last 7 road games.

We’re going to get some value with the Lighting with Anthony Cirelli, Tyler Johnson, & Alex Killorn.

At our 2nd defenseman spot, we’re going to go with Detroit’s Mike Green who has some decent value at the min price at $3,500 while skating with Detroit’s top defensive line.

In net, we’re staying in Detroit as we hope that the Red Wings Jonathan Bernier continues his recent stellar play against the Columbus Blue Jackets at home.