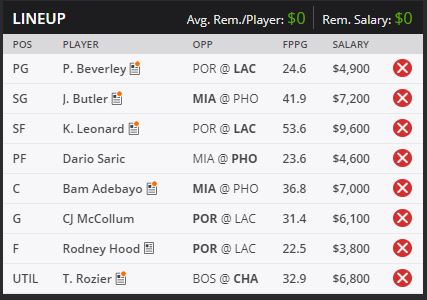 We have a 4-game NBA slate tonight and let’s check out our DraftKings “Main Slate” Lineup for tonight!

When it comes to our DraftKings lineup, we’re going to start with the Miami Heat as it’s hard not to make a case to get both Jimmy Butler & Bam Adebayo in the lineup as they are priced very recently in what should be a decent match-up against Phoenix. Obviously, I like this even more if Winslow can’t go, but it’s going to be hard to get away from them even if Winslow plays.

We’re paying up Kawhi Leonard for the Clippers and although I’m a bit concerned about the heavy minutes that the other main players (Beverley, Williams, Harrell) played last night, I don’t hate Patrick Beverley at this price especially as he should see another heavy workload tonight as he’ll need to try to slow down Lillard.

For the Trailblazers, I like CJ McCollum to have a big night agianst a tried LA Clippers team and I think he has solid value at just $6,100. We’re also going with Rodney Hood as he also has great value at just $3,800 while seeing over 30+ minutes per game.

I think a lot of people will be on Kemba Walker, however, I like the value that Terry Rozier brings to the table tonight against his former team. Rozier is averaging more than 35 minutes and 15 shots a game over his last 4 contests and as he should continue to see the volume tonight, I think he is a better option for the price than Walker.

Rounding out our team,  we’re going with Dario Saric in his match-up against a Heat team that is playing at a faster tempo this season.