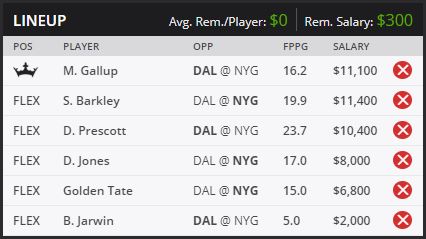 It’s Monday so we have some NFL action tonight!

Let’s take a look at our lineup for tonight’s NFL DraftKings “Monday Night Special” that features the Dallas Cowboys traveling to MetLife Stadium to take on the New York Giants.

The Dallas Cowboys comes into this game as favorites and although I think they’re going to be able to jump out to a lead as Dak Prescott and the Cowboys passing attack should take advantage of a weak Giants secondary, I think the Daniel Jones will be able to keep the Giants competitive in this game and piles up some solid passing statistics.

For the Cowboys, I’m going to put Michael Gallup in our MVP spot as I like his potential for a few big plays against the weak Giants secondary and pair him with Dak Prescott & Blake Jarwin.

For the Giants, I’m going with Daniel Jones who is coming off an impressive 322 yards, 4-TD performance against the Lions and pair him with Golden Tate (30 targets over his last three games) & Saquon Barkley.