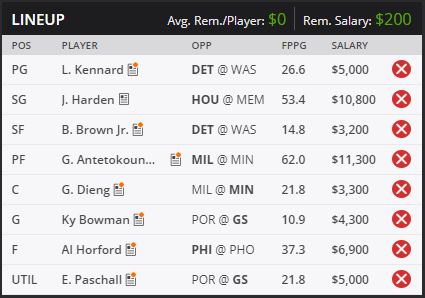 Let’s get our weeks started off on a winning note as we take a look at tonight’s DraftKings NBA “Main Slate” lineup that features 6 games and starts at 7:00pm!

We have a bunch of solid value tonight with some key players either being injured, suspended, or being given a night off so we have some solid roster flexibility tonight!

For our lineups tonight, we the tremendous amount of value out there, we’re going to have no problem getting both James Harden & Giannis Antetokounmpo in the lineup.

Harden is almost a must play with Russell Westbrook taking a night off for rest purposes and although there is a bit of blowout risk in the MIL/MIN game, the match-up is just too good to pass on Antetokounmpo.

We’re paying up for Al Horford who has a nice match-up agianst the Phoenix Suns and should once again be relied heavily one with Joel Embiid suspended. Horford went for a monster 49.5-point game against Portland on Saturday and as he should have no problem with Aron Baynes, I expect another big game tonight.

Golden State will be without Stephen Curry, D’Angelo Russell, & Draymond Green which opens up a ton of value for Golden State and I love going with both Ky Bowman & Eric Paschall who both saw a combined 72 minutes against Charlotte on Saturday.

We are also going to the Detroit Pistons for some value as with Reggie Jackson, Derrick Rose, & Blake Griffin out, this opens up some extreme value with both Bruce Brown & Luke Kennard. Brown & Kennard both should be back in the starting lineup tonight and as they combined for 39 shots on Saturday agianst Charlotte, I expect their volume to be about the same in a great match-up against a Washington Wizards team that can’t play any defense.

Gorgui Dieng will once again have a major role tonight in his match-up against the Milwaukee Bucks with Karl-Anthony Towns suspended and as Dieng went off for a monster 39.5-point performance against the Wizards on Saturday, I love his value tonight.